This morning on my way to work, I started thinking of the phrase “where the rubber meets the road.” Maybe I heard it on the radio or something. I pondered it for awhile as sort of a philosophical question: what is the exact point where the rubber meets the road?Why is that point more important or meaningful than the moment that directly precedes it or that which follows it? I considered the efficacy of the phrase as a metaphor; when you think about it, really, what does that even mean? What happens when the rubber meets the road? Progress? Forward momentum? What if you’re in reverse? I noted the similarities and differences of rubber on the wheel and the tar on the road; you know, both come from trees, both melt, both smell, stuff like that; and then I realized that ten minutes had gone by and that, even for me, this line of thought was unusual, especially at 7:30 in the morning, so I let it go and concentrated on not hitting pedestrians.

Later, I was teaching my head off about success, its definition, and what one needs to have, foster or obtain to achieve it. My students love when we have topics like this, because that means we will have lots of discussions and they can ask me questions about my personal life that will distract me and get me off on tangents, and by the time I get to their writing assignment, we will only have three minutes left in class, so we might as well just save it for next time instead of doing it for homework.

“So what you’re saying to me is that success depends more on the attempt, or the striving, than it does on the actual achieving? Is that right? It’s the journey, not the arrival?”

“Miss, you were a bartender, right? Did you feel successful when you got people really drunk on tequila?”
Just then, from behind me, the door opened, and over my head, in a perfect arc, sailed a condom filled with water. It exploded under a desk on the black, four-inch spike heel of Enjoli, a young lady who had recently had her named tattooed on her neck.

“Oh, hell, no! Was that Shequavia? Did anyone see that fat tranny? I will rip out her weave and stuff it down her throat!”

“Ah,” I thought. “Where the rubber hits the floor! Now, that makes total sense!”

There is one thing that continues to baffle me about the whole episode, though. The prophylactic was a bright, neon blue. Why would anybody buy a neon blue rubber? It’s like dressing up your penis like a disco wiener, or a clown willie, or a really extroverted scuba sausage. A cockstume, if you will. That’s just ridickulous. 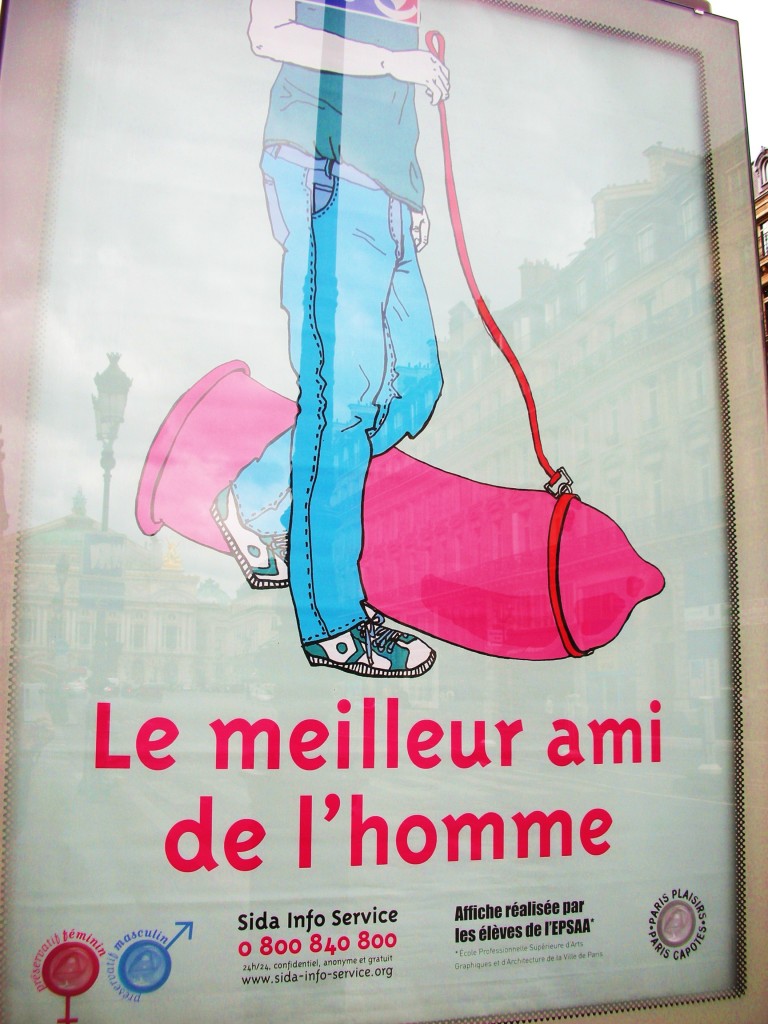 I saw this in this Paris outside of the subway. The caption says, “Man’s best friend.” It’s part of an AIDS prevention program. Clever, huh?

2 thoughts on “Where the Rubber Meets the Road”