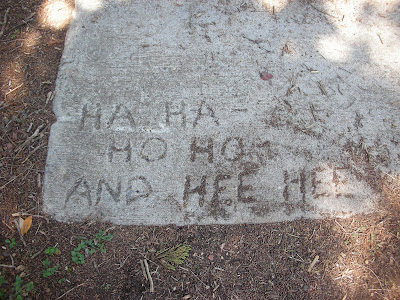 Quotes:
My cousin Alisa, when talking about health care – “Come on, people! Can’t we all just get a lung?”
“I believe in the sun, even when it isn’t shining. I believe in love, even when not feeling it. I believe in God, even when he is silent.”-Inscription on the wall where Jews were hiding from the Nazis.
“Many wealthy people are little more than janitors of their possessions.”-Frank Lloyd Wright
“I am sitting in the smallest room of my house. I have your review before me. In a moment it shall be behind me.” (Composer Max Reiger in response a critic’s letter.) Think about it….think…there ya go!
Pereant, iniquit, aui ante nos nostra dixcrunt. (Confound those who have said our remarks before us.)
“In skating over thin ice, our safety is in our speed.”
“The louder he talked of his honor, the faster we counted our spoons.” -Ralph Waldo Emerson
“Everything that I have done in my life that was worthwhile, I’ve caught hell for.” -Chief Justice Earl Warren
“I had a teacher named Clayford T. Grimm…”-my friend Charles, beginning a story
“Come on, Suckles!” – my friend Mark, urging the end of that story
“Mick Jagger is definitely a robot. They’re doing some experimental shit on him for sure – head in a jar shit, I mean!” -,McAdams, on a road trip.
“Well, ok, life is beautiful! Au revoir!” -My mom, upon hanging up the phone with me.
“Yeah, men melt like butter for you. They melt like butter, and then they leave a greasy stain on whatever you’re wearing.” -Carole “Good Times” Claybour, when I was telling her about how the menfolk just can’t get enough of me.
“The worst part of having pets is knowing they can’t be with you for your entire life. The best part of having a pet is being with them for theirs.” I may have gotten the wording wrong. My friend Lillie said something like this when we were having to euthanize our family dog, Lily. My favorite quotes are the ones like “Loose lips sink ships”. I always mix them up and say them completely wrong but the point gets across somehow….”Don’t throw stones on a glass boat?” “Hey, black kettle! Don’t call me Pot.” – From Emily, who is pretty in pink.
Got any more, blogsters? Bring it!