It’s been almost a month since I have written. It’s not that I have lost the will; lately, I haven’t found the time. Thanks to Becky for noticing I was gone! Anyway, here are some other things I have lost or found since I last checked in. 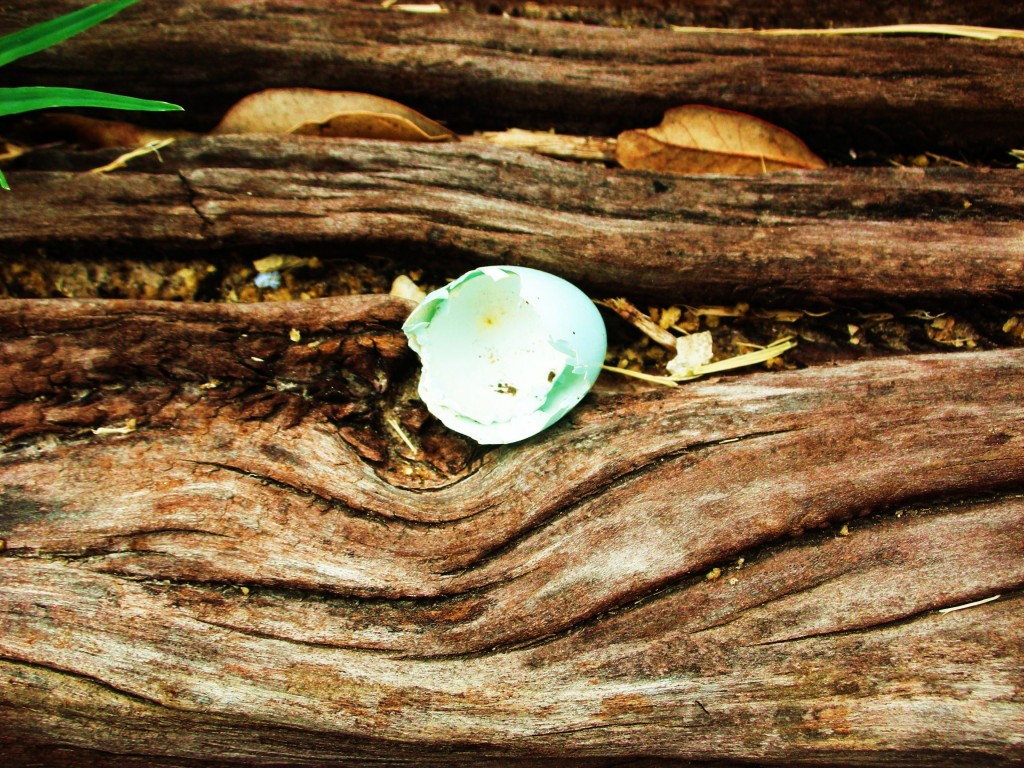 Found: First robin’s eggs, in various shades of Tiffany’s box, officially marking the most glorious season of all, Spring! I think finding one unexpectedly means good luck, and I pick them up and cradle them carefully all the way home, where I put them in a small square vase. Every time I look at them, I’m struck. They are so delicate and thin, but are colored so lushly and extravagantly. Admiring them, I feel like surely the good and the wondrous are everywhere, and that possibility is bursting forth all the time.

Found: A story by Robert Coover in an old NewYorker. I love me some Coover. He is a professor at Brown University who has been described as a “metafiction fabulist”. I don’t know what that means, but it’s a pretty cool way to be described, right? I first read him in a college anthology in the post-modernists section, which again, means-nothing-but-fun-to-say. The story, which was written in 1969, the year I joined the good folks of the Daisy Mae Yahoo Ranch for the Progressively Evolving and Hopelessly Deconstructed*,  was called “The Babysitter”, and I have already written about it in this blog, so if you want to read it or readmore of what I have to say about it, find it in that weird word cloud or the tag list. Anyway, I found this new story, “Going For A Beer”, and yes, ladies and germs, even when not tripping balls with the hipsters of my youth, I still love me some Coover! He does a lot of strange things with temporal perception; his stories always remind me of that Super Elastic Bubble Plastic stuff I used to play with as a kid, but which was so much fun, but which I guess was actually toxic, as I haven’t seen it in at least twenty years. 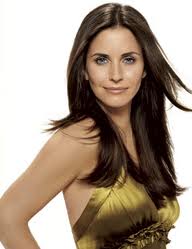 * None of that meant anything either, but there is something so satisfying about spewing ridiculous misinformation as if it was the truth, for no reason except to just do it! Good times!

Then, when I was looking for the link above for you lucky lamb chops, I found this article on my boyfriend, David Eagleman, from another old New Yorker, and it’s all about time, which you know I love to obsess on, and I know you love to read me obsess about! Man-O-Man! O ye gods of serendipitous synchronicity, receive my huzzahs and exultations as I fall on bended knee to praise your bad-assedness! It doesn’t get much better than this! http://www.newyorker.com/reporting/2011/04/25/110425fa_fact_bilger

*BtDubs: the article is long, but it really is fascinating. The Coover story is short, but is a perfect companion for the article, as it looks at time like the dilation and constriction of an eye, expanding between past and present, or narrowing sharply to focus on a moment. Outstanding!

Found: Lots of plants in my garden that I did NOT plant, but that are growing magnificently on their own intrinsic motivation! The technical gardener word for plants like this are “volunteers”, but I like to call them “Palinesque”, because they just go rogue and pop up whether you want them or not. Fortunately, my tomatoes, cantaloupes, peppers and basil aren’t assholes from Alaska, so it’s all very exciting. I also have beans, radishes, Japanese eggplants, turnips, onions, roses, cosmos, daisies, asparagus, carnations, carrots (oh boy!), and herbs galore!

Found: Music to look forward to! My friend has a band who put out a cd and I like it, which is kind of rare. I mean, I love my friends, and some of them are really talented, but lots of times their stuff is …well, you know, to each her own, right? I can’t help it; even though I don’t know anything about music and have no right to judge, I’m picky. But, I can honestly say I love this cd. It’s called “Dirty”, and the band is the Electro-Magnetics. Go here to listen to some of  it: http://www.theelectromagnetics.com/#!__songs. For still more titillation, (Grrr! Now there’s a word that means business!) here’s a photo: 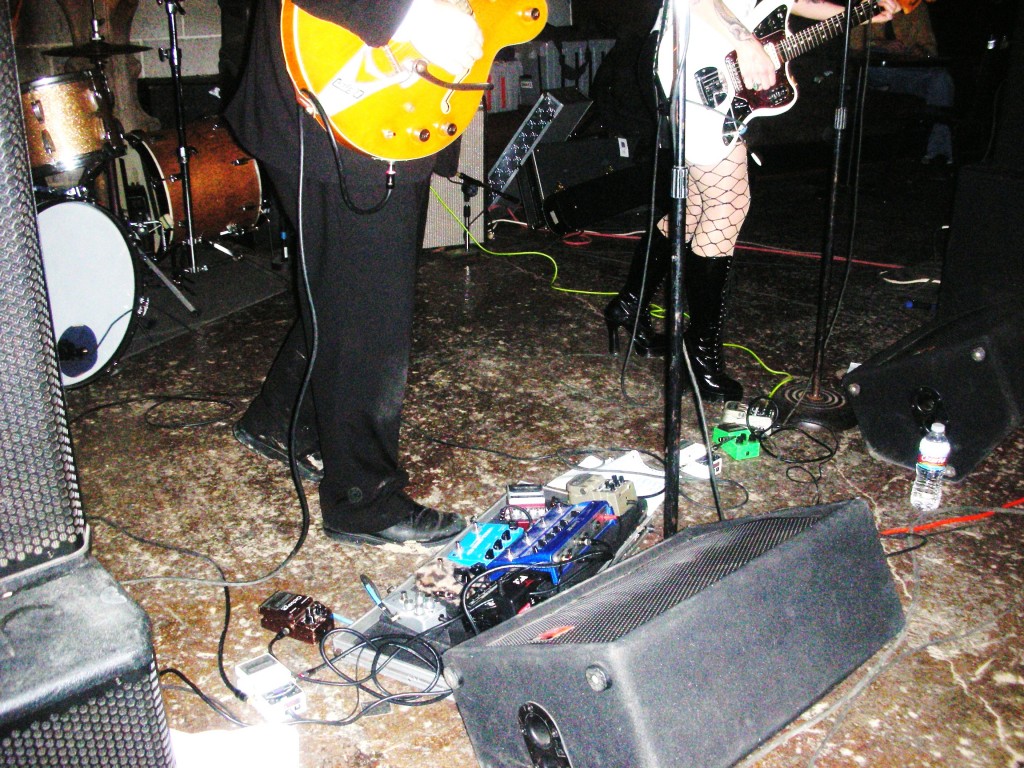 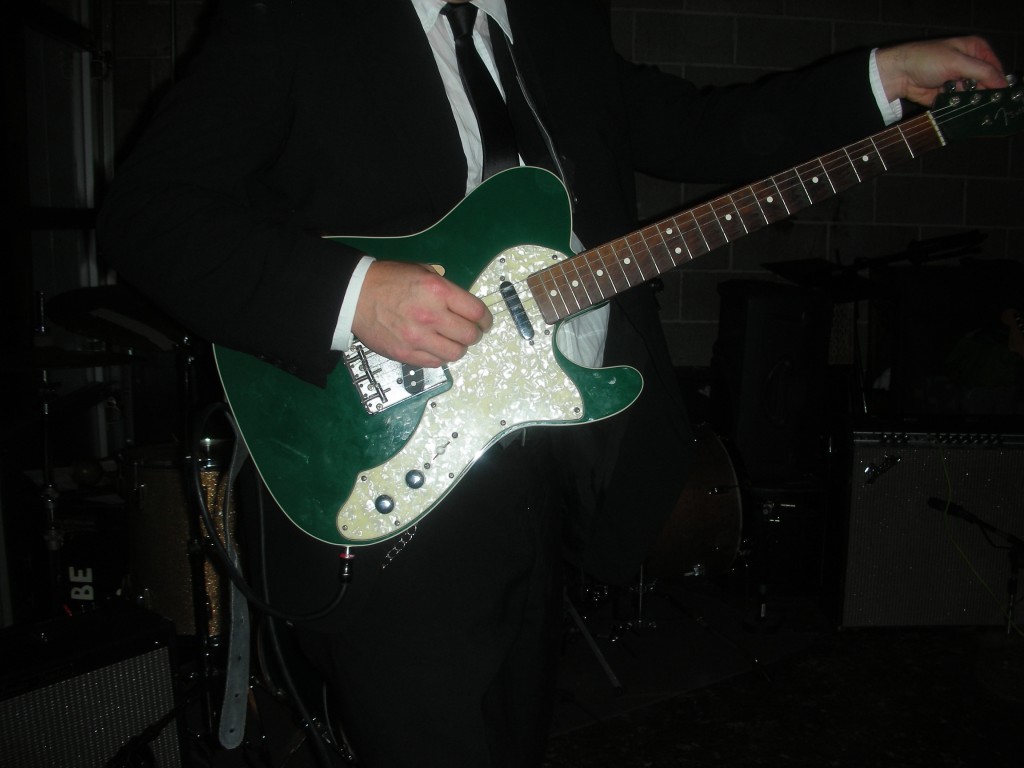 Oh, snap, suckah! I played you again! Guess you’ll just have to check them out for yourselves!

Also, that band I told you about from Austin, Okkerville River, are putting out a new cd on May 10. I realize that they are not for everybody, but I am a fan, and I can’t wait! Listen to that cd here:

Lost: My ability to sleep through the night. It’s been touch and go for awhile, but it’s all over now. Thank goodness for the BBC. And Nyquil, or as I like to call it, “Crystal Blue Persuasion.” I am growing fond of the mild hallucinations I succumb to during the day, so the sleep deprivation really isn’t all that bad.

Lost: My patience. I am so glad the school year is almost over, because I am really finding it difficult to be tactful or polite to those I work with every day. A boy told me he didn’t know why he couldn’t remember to bring paper to school with him, and it was all I could do not to tell him that the obvious reason that he had these lapses was because he was very, very stupid, and that I have known that ever since I met him last year, when he was a freshman for the first time. I told my principal that I had to break protocol by calling an ambulance for a student that couldn’t breathe and was having chest pains instead of taking her to the clinic because the nurse is incompetent and doesn’t have the authority to hand out aspirin, and that she could stick her protocol in her protocolon. OK, I didn’t actually say that, but I thought it really loudly. And finally, I told these kids who have been shyly flirting with each other for the entire year to go ahead and get a room and get it over with, because their pent-up hormonal desire was becoming tiresome and quasi-distasteful to me. Oh, all right! Again, I guess the word ‘told’ is a little strong here, as no actual words escaped my throat. Still and all, I really feel like I’m gonna blow soon, fo’ reals!

Found: I found a field full of fireflies. If you haven’t seen one lately, it is every bit as wondrous and delightful as you remember it to be.

Found: Under my bed, a shirt I have never laid eyes upon. That’s odd. It’s a little big and definitely not mine, but I do LOVE gifties, so I will accept it with pleasure.

Found: In TIME magazine, it was reported that Americans purchased approximately 330 million cases of wine in 2010, making us for the first time the world’s largest wine-consuming nation. USA! USA! I really had to step up my own personal boozing to help us kick some French wino ass, but I’m a patriot, and I do what I can, selflessly, so here’s to me! Of course, I didn’t do it alone, and so I’d like to thank a few of those that helped me achieve this honor: 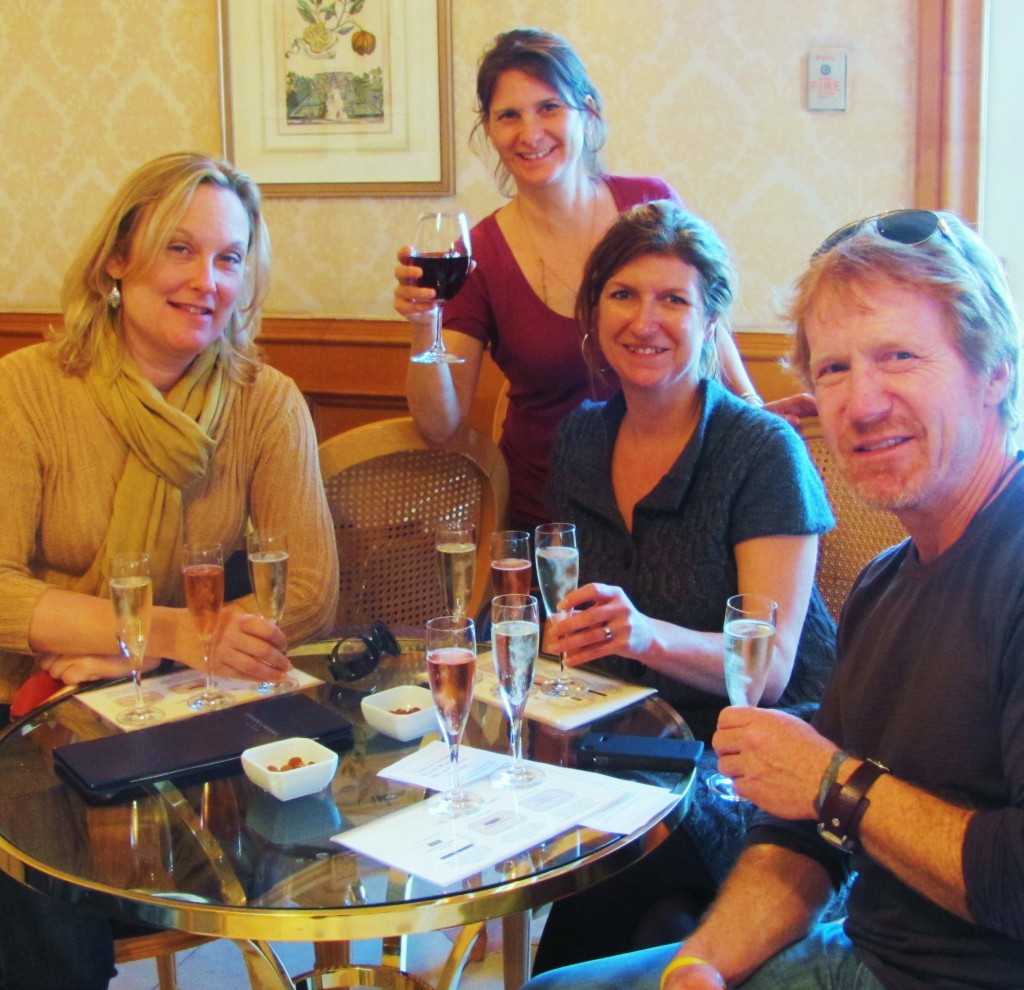 Please note that most of these lushes are three fisted drinkers, and only one of them is still able to stand. Everyone meant to show how much fun they were having for the photo, but their mouth muscles were too drunk to smile. It happens. 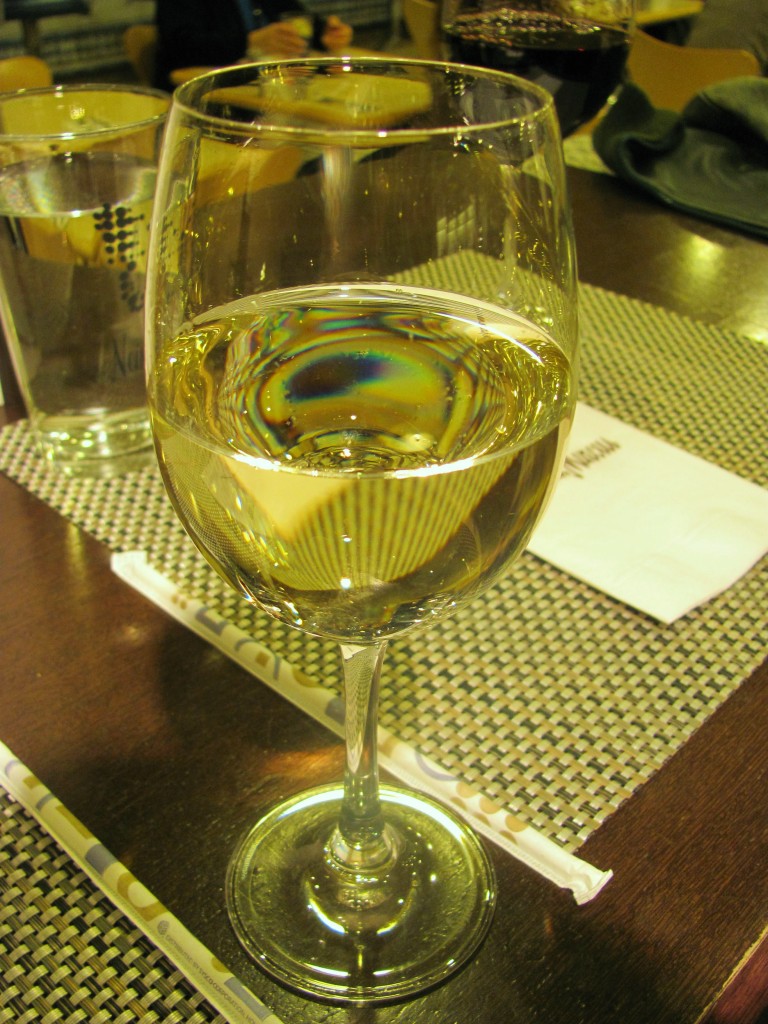 I think someone slipped a tiny oil slick into this glass. That’s all right. A little BP additive just lubes the throat and helps everything slide down real quicklike. 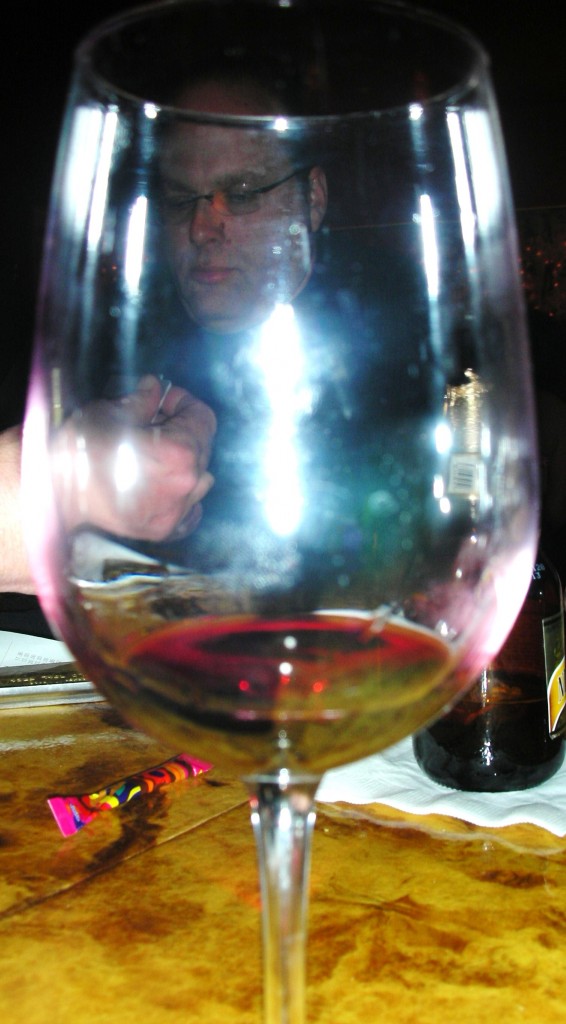 When I drank this glass, I saw drunk people! Creepy, right?

Anyhow, I know I am forgetting someone or something, but that’s the beauty of being hammered.

So, all things considered, many gains to few losses; it’s been a terrific month! I did miss you, though…

Oh yeah! I almost forgot! I also found a dog! I found him at the pound, where, coincidentally, I was looking for him.

Congratulations to Bonnie and Matthew on their wedding, and to Big Salty on her upcoming birthday! Also, Happy-So-Close-To-Being-A-Full-On-Mom to JR and to all you Big, Bad Muthas out there, Happy, happy day to you!