Recently, my father set out on a journey to find out how big his internet footprint is. Though he is a very private person, I suspect he is always secretly disappointed when he discovers that it’s tiny. He doesn’t share his searing social commentary, droll observations about love, life, and the human condition, and important survival information with the masses, like his dear daughter does. ( I’m referring to myself here, not my sister. Just to be clear.) He sends emails to a select few about all kinds of things, whether they are appreciated or not. Some of the people he sends stuff to are a group of his hard core followers,who I lovingly refer to as “his minions.” They think everything he sends is brilliant, no matter how boring, inane or inappropriate, and can spend months on a single thread of inquiry, like “Herring: America’s New Hotdog?” or his famous “Do you think this is funny?” series, which features tasteless, inappropriate jokes told by one of his “personas”, a politically incorrect, old, Jewish man who is “so out of touch, it’s funny.” (By the way, according to Dad, the answer to the “Do you think this is funny?” emails is always “Yes”, even when the most loyal of minions has given it a hard negativo.) He often writes in this weird, annoying dialect, and in addition to disgusting things, he has recently decided that he likes that which is hokey and cliched, so that’s something to look forward to.

Dad can also be repetitive. He will send the same thing out over and over again, even though you told him you hated it the first time. Sometimes he’ll ask you to find some repugnant thing he has sent in your mailbox, because he immediately deletes everything he sends or receives. He doesn’t want to clog up his computer’s memory. He spends a lot of time on it, but he doesn’t really get his computer.

It’s not all bad, though. Dad sends me all kinds of infographics, photography collections, and interesting articles from around the world. Appreciated. He also sends copious videos of fuzzy kitties or monkey babies, stuff about people with horrific deformities, and lots of things about various types of fecal matter or diseases you can get from messing with, inadvertently swallowing, or somehow being unexpectedly exposed to such doo doo. Not so appreciated. You’d think you’d like the monkey babies, but it gets old, especially those ones about interspecies friendships. “Oh, how cute! That monkey baby is picking fleas off an elephant!” Not cute! That just shows how stupid baby monkeys are! Elephants don’t have fleas!

Actually they do. They also get warts. But stop sending those videos anyway. http://www.fao.org/docrep/008/ae943e/ae943e0b.htm

Anyhoo, so Dad was googling himself and found out that one of his illustrations was online. Seeking excessive monetary compensation, he made moves to sue whomever put it online. One of Dad’s personas is a stingy, money-loving miser.  Turns out, the offending party was me.

Unable to figure out how to reference only the post in question in his Cease and Desist letter, he ended up emailing me almost all of my posts from 2010.

(Side note: he also sent it to all of his minions, so they could see his drawing on the world wide web.)

So I read them. All of them. It was truly enlightening. For one thing, I found out that I am just like my dad, except I can’t draw.

As you can see from the snippet of “Snippets” above, (does anybody ever click on the links I post? I mean, just to see what they are? C’mon, man! This could be interesting! It’s possible!) I, too, have been known to speak in questionable, annoying dialect.

I, too, have a high opinion of myself, and pretty much like any attention I can get. If I am not getting enough attention, I will even offer fake incentives to make myself appear more popular than I really am. Also, I believe that when I ask a question about myself, the answer should always be a positive.

I, too, will go on and on, for a long time, about things that nobody but me really cares about. And some of the things I care about are disgusting, offensive and inappropriate. And if you didn’t like it the first time, I probably wrote about it over and over. If you think this is hyperbole, just put something innocuous, like the word “cocksucker” in the search bar; post after post on that one! (It was a phase, I’m over it now. Pretty much.)

But wait – none of that is really me.That’s my persona talking! The truth is, my early blog posts are HI-larious with a capital HI! They are filled with facts, fibs and fantasies, and by golly, people like them! I used color, and pictures, and songs, and I wrote about things that made me happy. Not only that, but I was cutting edge and diverse in my information. For example, just today someone turned me on to this:

It reminded me of a post I wrote in 2009! That’s right! a simple search of “duck penis” in the blog archives pulled up this gem!

Good times! Sometimes I forget how much I have truly loved writing this blog. I love looking back on it and am so glad it is all here in one place for me to peruse and remember who I have been, who I still am, and who I am becoming. I want to thank chm chm, for giving me this site, and hosting it, and helping me with every little thing, be it technical or personal. Like venereal disease, this was truly a gift that keeps giving, and try as I might, I can’t get rid of it. Can’t seem to shake you, either. Lucky me!!

Also thanks to those of you who still read and comment and hope for the best with each post, even though they have been a little waah-waah, Debbie Downer lately. I picture you getting a message that a new post has been sent (or I call you and say, “Hey! New blog post! Did ya read it yet? How ’bout now? Do you think this is funny?”) and you click on it, thinking “C’mon, man! This could be interesting! It’s possible!” Thank you for hanging in there.

Merci to Maman, who always tells me I am a writer, and who has thought I was extraordinary since the first time she laid eyes on me. She was way ahead of her time.

Finally, thank you to my dad. I am so grateful for the you that is in me. Keep those cards and letters coming. Even the kitty ones. Like you, I am familiar with the delete button.

Just to make sure my dad reads this post (and sends it along! More readers for ME!!!!) I submit: Minotaur Dans Son Bains, by Harvey Richman 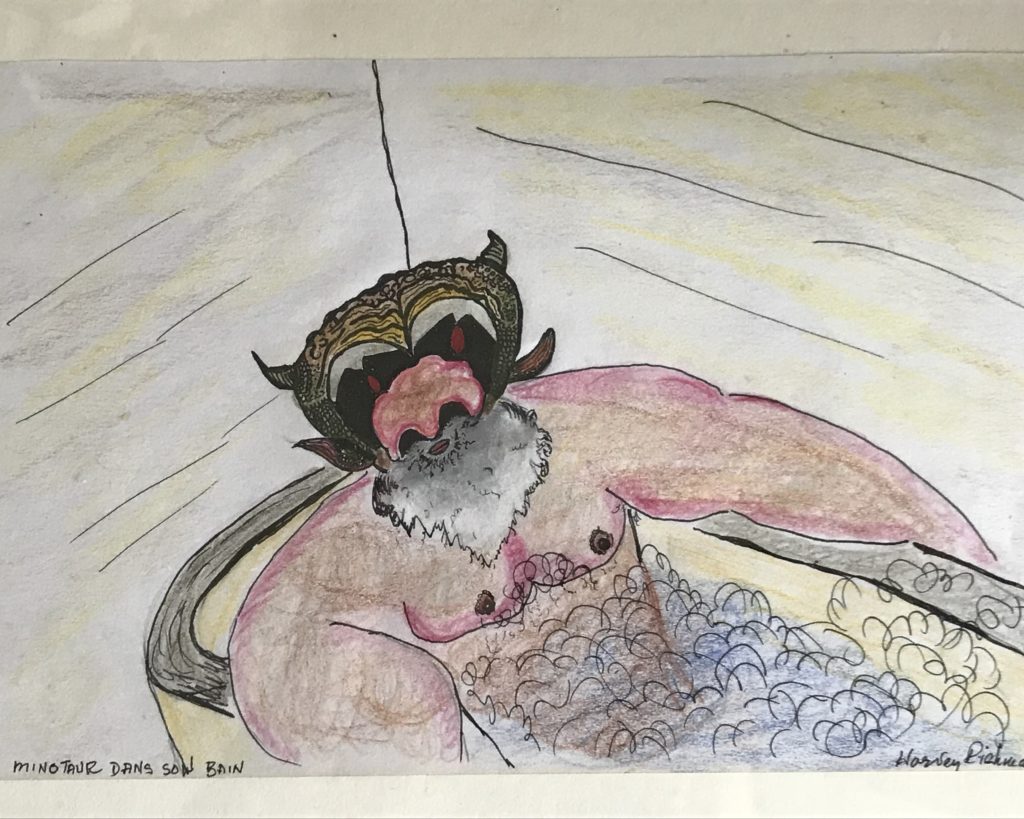 Well worth being sued over, non?