Skip to primary content
Skip to secondary content
Really, SNL, are you going to use my superclever made-up word as the crux of your “aflockumentary” skit without giving me credit! How can you sleep at night? You ought to be ashamed of yourselves! I blame Lorne Michaels, who I once saw in New York. I had been drinking rather liberally, shall we say, and I walked right up to him and said, “Hey! Hey, Lorne Michaels, creator of the long-running and ground-breaking late-night tv sensation Saturday Night Live! Hey! I just gotta ask you – How ya doin’, Lorne Michaels?” He completely ignored me, as if I was just some drunk stranger, some slurring, swaying cray-cray, intent on starting a long, rambling conversation about absolutely nothing with him. As if he didn’t have time for that kind of thing! Rude, Lorne! He acted like he didn’t recognize me then, just like he is pretending not to recognize my work right now!
You will pay, Lorne Michaels and entire cast and crew of Saturday Night Live! Plagiarism is a crime! I will not be wronged by the corpocracy of the National Broadcasting Company or any of it’s powerful affiliates, like Halliburton and the makers of Peeps marshmallow animals (have you noticed how they are now ubiquitous at every holiday, instead of just Easter? They don’t know their place, and they’re taking over, I tell you!) I will have justice! Prepare for an epic lawsuit, you bastards!*
In real news, I spoke to McAdams. Her school re-opened on Friday, and while she was apprehensive about returning, she had some good things to report. In a show of support for the school and its administration, almost 100% of the student body showed up for classes. They arrived early, wearing their school spirit shirts, or dressed in red, their school color. The students waited outside until the bell rang, and then together, as one group, they crossed the threshold and entered the building. Other schools sent pictures and videos of their students wearing red, or holding signs that said “We are Millard South.” Local businesses donated food and flowers. Substitute teachers from the surrounding districts volunteered to cover classes so that teachers from Millard South could attend the funeral services of Vicki Kaspar, the assistant principal who was killed. People were kind and gentle with each other, and there was a spirit of healing and fellowship in the halls. I am so glad that on the heels of tragedy, McAdams and her colleagues and students were able to have a life-affirming experience. Of course, things are nowhere near normal, and the repercussions of this tragedy will be felt for years to come, but it’s nice to know that after one person acted in a way that was so selfish and unfeeling, hundreds of people are responding with empathy and communal goodwill.
My friend Smurp hipped me to this great interview from W. Earl Brown, who played Dan on Deadwood. Fans, you’ll love this: http://www.avclub.com/articles/w-earl-brown,49370/ . If you don’t want to read it all, here’s a bad news/good news summary of what’s going on Deadwood and beyond: BAD NEWS- The much anticipated and oft-dreamed of movie finale of Deadwood is nothin’ but a fond, fruitless fantasy. Since the show hasn’t been on the air since 2006, you probably figured that. I was still clinging to hope, because that’s how I am, but now it’s official – I have been DENIED!
GOOD NEWS- A new Milch series is coming up this year! It’s about horse racing and has an all star cast, led by…wait for it…Dustin Hoffman, Nick Nolte and Richard Kind, who you might now from Curb Your Enthusiasm. It’s in post-production at HBO as we speak!
So, yay! I’ll drink to that, cocksucker!**

*Full disclosure – I stole the Aflocalypse thing from an article I saw in a newspaper story on the Internet. And, as far as I know, NBC is not in anyway affiliated with Halliburton or Peeps. Curse my unwavering honesty and commitment to journalistic integrity!

** I can’t help it! It’s like he has some Svengali-like hold on me! Swearingen makes me swear in general, even when it’s not appropriate, shit-sticks! Doh! I did it again! For fuck’s sake, make it stop! 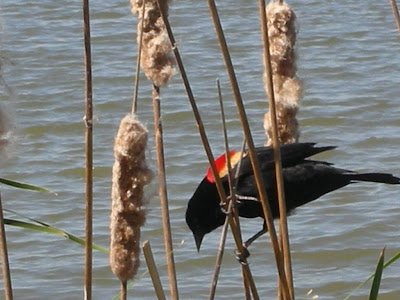 If I get killed by a dead bird plummeting from the Arkansas heavens in the dead of night, suspect fowl play.

Get it?
http://www.google.com/hostednews/afp/article/ALeqM5i8q2JVlmPaCK7bKZcBbUQhmwwieg?docId=CNG.e83fdace708a2d6c4a7b95b21e5ed3a6.3a1
P.S. They say it is fireworks that caused the birds to suddenly take flight in the dead of night. I wonder when birds learned to expect the 4th of July. Can someone say “government-chupacabra-area 51-like-hell-they-walked-on-the-moon-it-wasn’t-Oswald-alien-Hussein-Obama-there-is-no-global-warming-conspiracy time?”