Truth be told, I’m not a big bird fan. Birds are weird and creepy, and they have mites. Some of them have flat eyes, and legs made of snakeskin. They’re prehistoric. Don’t even get me started on their beaks, feet and talons. If I think about it enough, and especially if I begin to obsess on their dirty bird poop, I get really uncomfortable. I’ve talked about it before- a lot. If you want to revisit my paranoia, go to this post and scroll down:

But when they travel all together, in those surreal bird cloud, I remember what the word ‘awesome’ really means, and I’m mesmerized.

Look at that! So cool! They look like whales floating in the deep blue sky, or jelly fish, or the oh’s of Virgina Slim smoke chm chm used to blow when she painted my nails in high school.

I’ve tried to take a thousand pictures of them, but they’re tricky little bastards, so fast and ephemeral.  I did write this poem:

Maybe they do it

For the fun of fractaling

Turning on a talon

In the moon’s curve

Beaks to the stars

The march of mirror images

Into the eyelash slit of dimension

Maybe they do it to baffle me

I miss the light

Hypnotized by a dazzling spiral

They laugh, pointing with their feathers

In my sterile climate controlled bubble

They rise in unison, enticed by a breeze

Those who missed the show

Force my attention back to the road

Shooting me the bird

This post is dedicated to my beautiful, graceful cousin, Robin. Soar, cousin!

You know, being ahead of the trend really requires a grace that few of you will ever have to  achieve. One must possess tact and feel a sense of noblesse obligé when others come, excited about news or hip new fads, and I, princess of politesse that I am, do not yawn, roll my eyes, or belch at them – sometimes it’s fun to burp when you are bored or annoyed – because their exciting little tidbit is, frankly, passé, to me.

Of course, I understand that there is a certain degree of natural synchronicity in the universe, but, to be honest, I do believe that much of the time, I come up with an original, never-before-imagined idea, and the rest of the world just copies me. I know, I know… it’s the most sincere form of flattery, blah, blah, blah. Still, all I ask is for the proper credit, perhaps a little praise for my prescience. And monetary compensation. That’s more than reasonable, non?

For example, NPR recently called me. I usually only answer when it’s that sassy, randy minx, my Marketplace manfriend, Kai Ryssdal, calling. (Sample conversation: “What’s the market doing now, Kai… do I see that little NASDAQ going up? My, how your portfolio is increasing! Who’d like to make an investment?!”)

I thought it was Kai-Kins, so I picked up. Quel horreur! It was that wretch, Nina Tottenberg, attempting yet again to best me. This rivalry has been going on ever since Garrison Keillor tried to lure me to his prairie home, while completely ignoring her awkward, pathetic advances.

“AVR, Darling, I believe we have finally scooped you! My Weekend Edition team found the most adorable little coffee shop, full of the most delightfully real people, in which to do an election piece! You’ll simply never guess where it is!”

I thought long, but not hard, which I think would be a great title for an older adult contemporary concept album.

“Did you go to Trudy’s Diner in Idaho City, Idaho, Nina?” I asked.

“Idaho, Nina? Let’s be real, shall we? You da ho! Everyone knows whoClick and Clack, The Tappit brothers, are really tapping! Good day!”

My faithful readers will recall this recent post https://smalleradventure.com/2012/09/what-up-idaho-city in which not only did I bring Idaho City to you, but I also had a special shout out to my friends at Trudy’s. That’s because I am a real journalist and cutting edge trend-setter. Here’s the NPR piece.  Nina was so upset she had to get her lackey, Rachel Martin, to do it. http://www.npr.org/2012/10/21/163336898/election-2012-brunch-in-idaho.

Of course, you know that two of the books I reported on have been made into major motion pictures this year. Perks of Being a Wallflower, the young adult novel by Stephen Chbosky is currently in theaters. https://smalleradventure.com/2010/11/before-i-get-up/

Cloud Atlas, by David Mitchell, is coming out October 24th. It’s huge! I mentioned it way back in 2011 here: https://smalleradventure.com/2011/08/all-the-buzz/ Back then I hoped the movie didn’t suck. I still do.

Speaking of good books being turned into movies that hopefully don’t suck, Let The Great World Spin by Colum McCann is in production now, with J.J. Abrams of Lost fame at the helm. Could go either way. One of the great things about that book was Mr. McCann’s gorgeous prose, and I don’t know that the big screen will be able to capture that. One of the great things about Lost was Desmond. 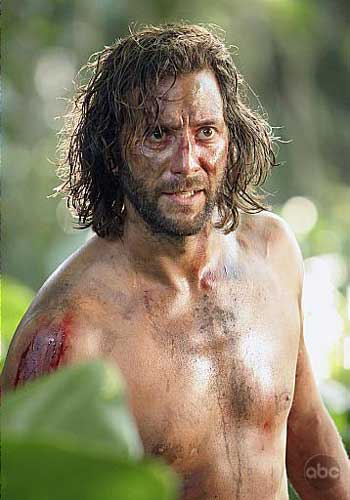 Damn. I just love me some Desmond, brutha. Even dirty, bloody and sweaty. Hell, who am I kidding? Especially dirty bloody and sweaty! Don’t judge me! At least I didn’t get his face tattooed on what appears to be my slightly hairy upper thigh. Yet. 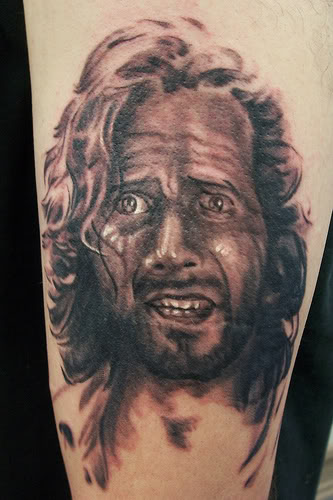 OK, back to the highbrow lowdown you’ve come to expect from me. Here’s Colum McCann’s website: http://www.colummccann.com . His new book, Transatlantic, comes out next year. You can hear him reading from it here: http://www.newyorker.com/online/2012/04/23/120423on_audio_mccann

I’ve been reading a book of short stories by Etgar Keret, an Israeli writer, called Suddenly, A Knock at the Door. Mr. Keret’s imagination is truly inspiring, and the depth of the stories he manages to tell in just a couple of pages is amazing. I was going to tell you all about him, so you’d be the first on your block to know, but then Selected Shorts scooped me big time! Crap’s Ass! Anyway, listen to him speak about writing and hear one of his stories read here: http://ec.libsyn.com/p/5/a/9/5a92f4fbc0989752/Pcast_SS201204.mp3?d13a76d516d9dec20c3d276ce028ed5089ab1ce3dae902ea1d01cd873fd5c158a089&c_id=5062094 When you are finished listening, scrape up all of your money and send me to NYC to hear him and Gary Shteyngart (https://smalleradventure.com/2011/06/tuesdays-goal-appreciation) speak on April 17th. I’ll make it worth your while!

Finally, you know how many times I have warned you about birds. They are dirty, full of mites, have flat, beady eyes, and sharp pecky beaks. They fly, which means they are capable of- and enjoy!- dive bombing missions, and they believe the world is their toilet. Their legs are made of dinosaur-snake skin (Evolution, my dear Watson!) and they have talons to claw at your eyes and rip out your vocal chords so that you can’t scream for help.

But here’s the worst thing: They are getting bigger and bolder. Think about it; there have always been big blackbirds, but when you were a kid do you remember grackels the size of a terrier? Do you remember them standing their ground in the street and staring into your car’s grille, just daring you to hit them? No sirree, Bob, those feathered footballs have grown huge bird balls, and they are coming for you! I took these pictures recently to illustrate my point. 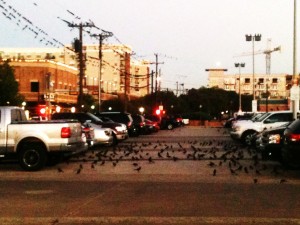 Notice how the birds line the telephone wires. That’s pretty horrifying. They are listening to our conversations. They are watching. Watching and waiting. Preparing to wing off to their leader. Freaky. Weirder still is the way they are hanging out on the parking lot, pacing. Why are they there? I go in a little closer to investigate. 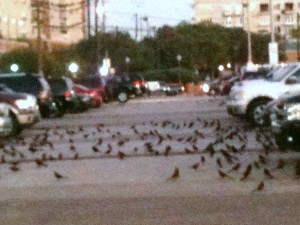 I’m not gonna lie. I was spooked, and my camera got a little shaky. There was no food on the parking lot, no nest building materials, nothing sparkly. Why would they be hanging out on the ground?

I looked around. Nobody in the lot but me. The streetlights were about to come on, providing a glow to the dusk. I scanned the surrounding signage; one of them said “STOP!”, which seemed like a good idea, and another said “Park, Lock and Hide.” Then it hit me; those birds were just waiting for some sucker to forget to lock his Lexus and then they were going to jack that ride! Fuckers! They are afraid of nothing, and people, they will steal     your     car!! No lie, GI!

I know what you’re thinking. Has it come to this? I, too, thought perhaps I might be slightly paranoid. There was only one thing left to do. I needed to stare those beasts right in their flat, beady, red eyes and judge their true intentions for myself. I was terrified. But I’m a journalist, and that’s what we do.

I crept up to one of the beaked bastards carefullly, quietly. I steeled myself and tapped him on the shoulder. Slowly he turned….this is what I saw. Judge his intentions for yourself. 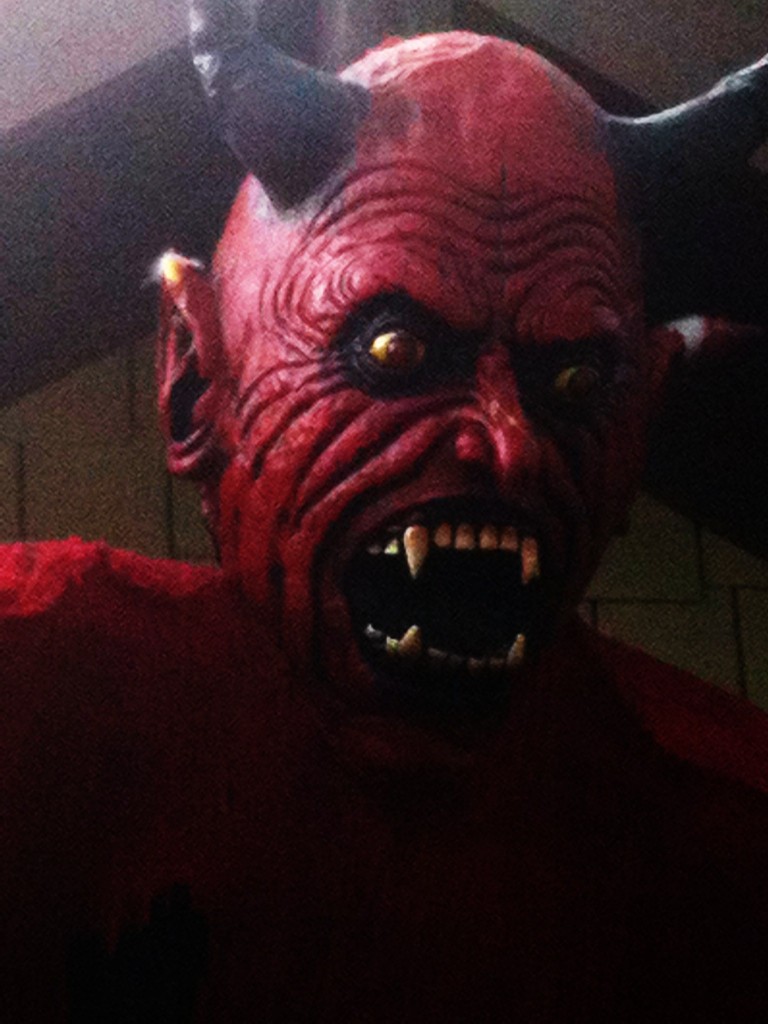 I know. Hideous. Birds are Beelzebub. You heard it here first. I hate to tell you I told you so, but…well, suffice it to say, being right all the time is a bit of a curse.

Of course, I am not the first to notice the increasingly hostile attitudes of the feathered fiends. Daphne Du Maurier brilliantly chronicled their homicidal natures in her famous short story, “The Birds”. If you haven’t read it, it’s really good; it’s a wonderful example of build and suspense. Here is how she describes the birds for the first time in the story:

In spring the birds flew inland, purposeful, intent; they knew where they were bound; the rhythm and ritual of their life brooked no delay. In autumn those that had not migrated overseas but remained to pass the winter were caught up in the same driving urge, but because migration was denied them, followed a pattern of their own. Great flocks of them came to the peninsula, restless, uneasy, spending themselves in motion; now wheeling, circling in the sky, now settling to feed on the rich, new-turned soil; but even when they fed, it was as though they did so without hunger, without desire. Restlessness drove them to the skies again.

Black and white, jackdaw and gull, mingled in strange partnership, seeking some sort of liberation, never satisfied, never still. Flocks of starlings, rustling like silk, flew to fresh pasture, driven by the same necessity of movement, and the smaller birds, the finches and the larks, scattered from tree to hedge as if compelled.

It only gets worse from there.

HBO has obviously been reading this blog, and has realized that what interests me interests the world, and so they have just aired a made-for-tv movie called “The Girl”, which is about the single-minded, relentless obsession Alfred Hitchock had with his leading lady, Tippi Hedren. I haven’t seen it yet, but I’ll bet it’s pretty good, so I give HBO my blessing – this time. But it was my idea. https://smalleradventure.com/2011/11/all-the-things-that-fall-in-the-cracks-of-the-couch/

One last thing: a quick review of a movie I have seen, Seven Psychopaths. It’s good, real good! I give it a solid “A”. It’s beautifully shot, interesting and oddly funny, and the cast is fantastic. Props to KW for picking it out and making me go see it. KW, I will never doubt you again! I can say that confidently knowing you won’t hold me to it, as you’ll never read this, since it’s not on Facebook.

One other last thing: Daphne Du Maurier also wrote a story called “The Doll” about a young woman’s obsession with a mechanical sex doll. I’ll investigate it immediately.