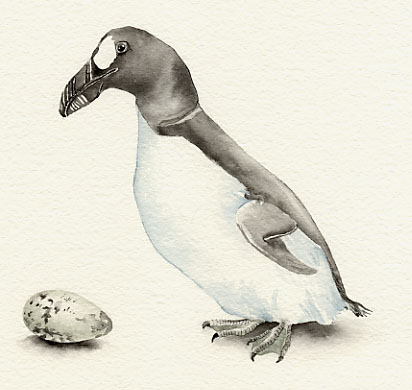 This is an auk. Here is an excerpt from Peter Matthiessen’s Wildlife in America (1959).

“At the north end of Eldey [Iceland], a wide ledge descends to the water, and, though the sea was running, the boat managed to land three men, Jon Brandsson, Sigourour Islefffson, and Ketil Ketilsson*. Two auks, blinking, waddled foolishly across the ledge. Islefffson and Brandsson each killed a bird, and Ketilson, discovering a solitary egg, found a crack in it and smashed it. Later, one Christian Hansen paid nine pounds for the skins, and then sold them in turn to a Reykjavik taxidermist named Moller. It is not known what became of them thereafter, a fact all the more saddening when one considers that, on all the long coasts of the northern ocean, no auk was ever seen alive again.”

What a sad end! Auks were the first species native to North America to become extinct by the hands of man. That was in 1844. There is talk now of cloning them – Jurassic Auk?

Of all the animals to clone, the auk probably wouldn’t top the list or maybe even make the cut. After all, there are a lot of ex-beings to choose from. Check this out: http://www.pixable.com/article/heres-every-single-animal-that-became-extinct-in-the-last-100-years-photos-67674

Clods crashing on a wooden box

No longer a memory

*Aren’t Icelandic names hilarious! These have not been changed, in order to shame the guilty. Even though they’ve been dead for centuries, shame on them! And speaking of shame, shame on you, Walter James Palmer. Enjoy that fur moldering on the wall of your family dental practice in Minnesota. It takes a real man to lure an animal out of a protected environment so you can kill it. The $54,000 it cost to take the shot was steep, but the pride you must be feeling for having paid it – priceless.

P.S. Thanks for reminding me, Smurp. It feels good to be back in the saddle! More soon and much love!