When I first started this post, the big news around here was the weather. It was cold. 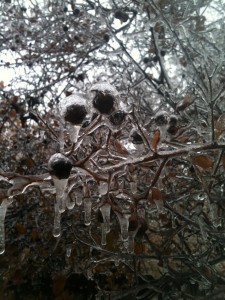 I’m not really a fan of extreme weather of any sort, but I am the rugged outdoorsy type, so I bundled up in layer upon layer of fat wool sweaters until I could barely move my arms. I resembled a cross between a sausage and a starfish.Or a starfish stuffed with sausage. Either way.

My little dogfriend loves the out of doors on a frozen tundra, on account of his fur parka and an unkind personality streak which causes him to laugh hysterically when people fall down on the ice because their little bird ankles can’t support and balance at the same time. “Come on!” he cries, trotting in circles and dancing little jigs. “Hold on to the leash and I’ll drag you down this hill! I won’t go fast, I promise!” Then he laughs like a hyena on nitrous oxide. I like him, but he can be a real asshole.

Anyhoo, as I picked my way carefully through the alley, like a stork in stilettos on a mirror slathered in baby oil – and we all know how cautious smart storks are in such situations- I noticed that my belly was warm, swaddled as it was in wool and fat, but my feet were frozen through tights, two pairs of socks and my boots. They were like ice-bricks, I tell ya, and after awhile – not long at all- they started to hurt like I was walking on stalactites. Or maybe stalagmites. Either way.  I had to turn back early, much to the chagrin of the dogboy, who charged me and tried to tie me up in the leash. I didn’t raise him to be like that, and I don’t know where he picked up that kind of behavior.

When I got home, it took me awhile to unwrap, so I took it slowly and enjoyed it, playing like I was a star in a mummy porn, as one does. All went well until I got to my still frigid feet. They were still uncomfortably cold to the touch, kinda blue, in a sad Miles Davis way, and I couldn’t move my toes. They were stuck together and stiff, like they could crack off if I messed with them too much. They worse thing was that in the middle of the ball of each foot was a gray dead place that was really cold, and even when I poked them with a fork – as one does- I couldn’t feel anything.

I immediately called my sister, who knows everything. She has suffered from a medical condition called chilblains for several years now, which is this cold foot thing that hurts and makes you complain and buy special socks and waterproof footwear, so I was pretty sure I had them, too. Lil Salty quickly disabused me of that notion. “Chilblains,” she said knowledgeably, drawing the word out impressively to add gravitas, “are a young woman’s disease, so you probably don’t have them.”

She wasn’t raised to be an asshole either, but there you have it.

I checked out my feet again, which were not warming up as rapidly as I felt they should be, but they were getting rosier, which I took as a good sign. The dead spots were kind of fascinating. They were the size of a quail egg, still gray and icy, as if, unknowingly, I had absorbed  icicle nails or needles inside of my soles, and once in there, they broke into tiny frozen shards, and just stayed in there, chilling, in all meanings of the word. That happens, you know. In fact, it’s happened to me, remember?

So, I lay on the couch and tried to breathe life in my poor tootsies, and decided that if I didn’t have chilblains, I probably had davidblaines, which are cool and interesting at first, but then hang around too long and grow into a major irritation.

Finally, after a long time, longer even than one can imagine reading about someone else’s cold feet, my flesh returned to its normal healthy pink, my toes regained the ability to wiggle freely, and I could walk without pain, so I cursed the dog one last time for good measure and went to Target.

Now, you might not have guessed this about me, but I talk to strangers. I nod and smile sweetly, I engage sad looking people in check out lines, and sometimes, if the mood is right, I’ll chat up some lady in a nearby bathroom stall. I’m a people person. So it was no surprise when I struck up a conversation with a lady in front of the dollar bins.

“Oooh, hand warmers! Do those really work?” I queried. She looked like she would know. As usual, my razor sharp instincts were correct.She was an expert.

“Well, I’m from North Dakota, and we always keep them in our cars in case of a winter storm,” she answered, clearly happy for the conversation. Who wouldn’t be?

“Look,” she said. “They have them for your shoes, too! Feet get cold in North Dakota, you betcha!”

What a fortuitous turn of events! I told her all about my davidblaines, and she nodded and clucked like a hen on a nest. I wish she was my sister. She told me that when your feet get dead spots it’s an early stage of frostbite. That really made me feel tough and rugged; I had braved the frigid, bitter, unforgiving frontier to do what I needed to do, things others would shrink from, in their toasty living rooms, drinking hot rum toddies, all warm and talking about vacations to Ibiza. Not me, though! I conquered the antarctic winter, I barreled through the blizzard, and I suffered for it. I suffered in silence, of course, as I am wont to do, but, like pioneers before me, I paid the price with quail egg sized Paul Bunions.

3 thoughts on “Frosted my toes, man!”