The other day I went into an automotive store in search of truck nuts*. I drive a compact, hybrid vehicle, and I was looking for a pair of teeny-tiny ones, maybe covered in a plush, fur-like material – you know, the kind of cojones that say, “Go on ahead! Life’s too short to argue about who is going to be first! After you!”

I couldn’t find them. I looked in the nuts and bolts aisle, Hummer accessories, and hammers (I was confused by a sign advertising “ball peens”). No luck. But I did come across this: 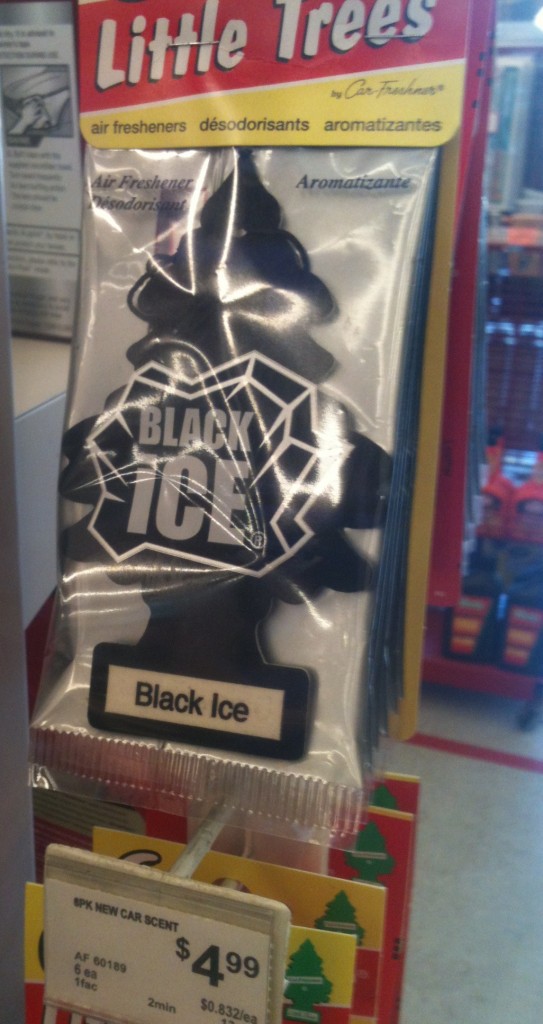 Frankly, I am both baffled and outraged. What does black ice even smell like? Water? Winter? Fear? Why would you want the smell of “Oh shit! What the hell was that?!” stinking up your car? It’s the scent of frantic, of “Crap’s ass! Why me?”, of the unexpected, uncontrollable nightmare fear of too late. It’s pine-shaped panic. What kind of sadistic twisted freak would invent this? Is there ever a situation where black ice is a good thing? “Hooray! Guess what I found? Sudden chaos!” Who would buy it? It’s like a curse waiting to happen. How can someone sell that to someone else in good conscience? They should be outlawed, I think! Who’s with me?!

Please, someone, explain this to me. I’m losing sleep. With all the problems we have in this world, with the violence and the misery, the mayhem and misfortune, I just gotta know…WHY????

From Wikipedia, the free encyclopedia 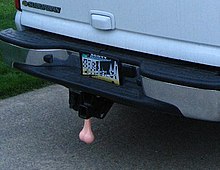 Truck nuts, also known as Truck nutz, truck balls, BumperNuts, BumperBalls, CargoNads, Drive-thru Danglers, Trucksticles, HitchNuggets, Balls-on-a-truck, or, as they are known in the United Kingdom, Bumper Bollocks, are plastic accessories for pickup trucks and other vehicles which resemble a pair of dangling testicles.[1] They appeared in 1998 in the United States, and were first sold on the internet[citation needed] in 1999. Truck nuts are usually hung for humor or amusement. They are attached under the rear bumper of the vehicle so they are visible from behind.[2]

Black Ice PSA:I  know it’s August…but not in Siberia! Knowledge is power! In the immortal words of my sister when she converted all of the dashboard information in my car to French, “Learn something, stupid!”    http://www.wikihow.com/Drive-on-Black-Ice

2 thoughts on ““Usually hung for humor or amusement””