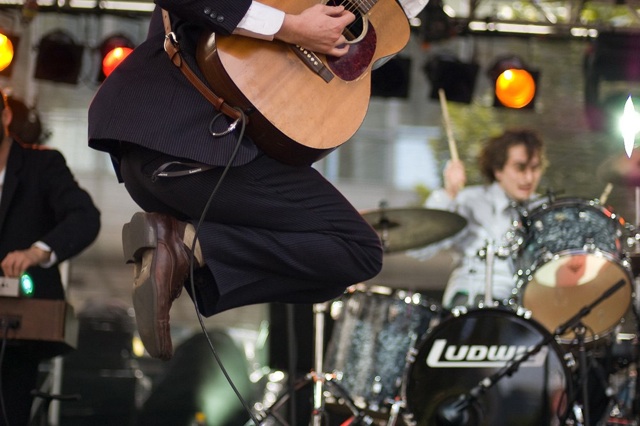 So, the other night I decided to go out. Actually, I didn’t just spontaneously “decide” to go out; I had planned this particular soiree for months. Planning is not really my thing. Generally, I don’t feel comfortable with making an effort, so committing to doing something and then making it happen is a bit of a departure for me.

In about June of this year, my good friends – well, I hate to be a name dropper here, but just between us- my good friends, the band Okkervil River- called me and told me that they were going to be playing in my town and asked me to please come to their gig, so that perhaps they could experience the coveted “Smaller Adventure Bump” that comes when my fans get wind of my whereabouts and activities. They’re all solid dudes (and one totally badass wicked-cool lady), and they’ve worked hard; I’m always willing to give deserving kids the benefit of my unique station in life. Besides, Okkervil and I go way back; here’s a picture I took of them when we took our big canoe trip down the actual Okkervil River, which is in St. Petersberg, Russia. 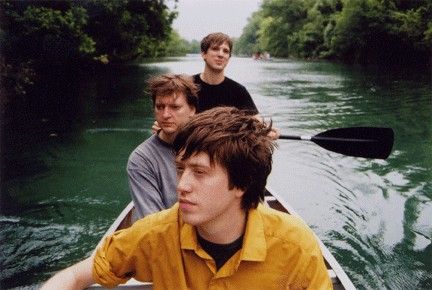 Ah, we had a big old time! It was a great trip, and we all became really close. I swear this is all true. Except for this part: I didn’t really take that picture. I got it from Google Images off of Dave Krause’s website, floatingfoam.com. And also, that part about the band calling me; it either went down exactly like that, or maybe I looked on their website and found out their tour dates. On account of I don’t, you know, really “know” the band. I did meet the bass player at a backyard party a South by Southwest one year. OK, “meet” might be a little strongly worded; someone I was with said, “Hey look! That tall shaggy guy over there! That’s the bass player for Okkervil River!” But there really is an Okkervil River in St. Petersberg; well, according to Wikipedia, anyway. I wouldn’t know. I’ve never been to Russia.

So, anyway, when I heard they were coming I wrote it down on my calender, even though the actual show was months away. I talked it up to all my friends. The one I thought for sure would go with me watched a video of the band performing one of my favorite songs, said it “sucked dong”, and shortly thereafter moved to another state. Others expressed vague interest- “Oh yeah, I’m always down for new music – what kind of a weird name is that for a band anyway? Are they, like, country?” – but I began to resign myself that nobody wanted to go.

Except for me. I wanted to go. And so I decided that goshdarnit, I would, even if I had to go by myself.

By myself isn’t so bad. I go to eat by myself. I go shopping by myself. I go to the movies by myself. But a concert? That’s cool for young-hipster-wherever-I-go-is-where-the-real scene-is guys, but not for a tiny-middle-aged-double-chin lady.

But still. What do I care if fresh, young, non-jiggling people look at me with a mixture of confusion, pity, and a sense of foreboding doom, as if I was a warning for what life could become? I like the band! I like going to shows! I’m going, dammit!

And so, once I made this decision firm, I had plenty of time to wrap my head around the solo concert experience. In time, I grew used to the idea, and then excited by it. I would go to the show by myself, and I would like it!

But then, strange things started to happen.

I asked my friend who never goes anywhere if she wanted to go, mostly just to be nice. Even if you never want to go anywhere, it’s nice to be invited. Much to my surprise, she said yes.

I told my friend Lisa I was going, because she’s from Austin, and the band is from Austin, and she loves all things Austin, so I figured she’d be proud that I was supporting Austin things. “I love them!” she exclaimed. “Remember the time I thought I saw the bass player at that party? How about my boyfriend and I go with you?”

Then, my neighbors called. “We want to go new places and do new things. What’s that band with the weird name again? Can we go? Can we bring our cool friend Andy along also?”

Well, hellz yeah! The more the merrier! I guess where I am is where the party wants to be! Yay!!!! Hello, good times! Let’s roll!

Lisa was the first to drop out.

It seems that unbeknownst to her, her boyfriend signed the two of them up for a reality show called something like “Pimp My Kitchen.”  After a rigorous screening process, if you are lucky enough to be chosen, a camera crew comes to your house, commiserates with you about how hideous and unsanitary your food galley is, and then destroys it. You move into a hotel or something, and they rebuild it, stronger, faster, able to leap tall trees in a single bound.

Lisa’s shithole rat trap of a kitchen made it to the top three finalists, and she and her boyfriend had to make a video showing how excited they were that the kitchen cavalry was coming.

At least it was an original excuse. And besides, everyone else was still in.

I was going to pick up my friend who never goes anywhere at quarter to eight on Saturday. I called her Friday after work.

“So, how you doin’?” I asked this like Joey on Friends did. Remember?

I was shocked. I called to give her an out, yet she was still in. Well, yippie ki yay and hot diggity dog!

7:00 came and yet without a cancellation call.  I got dressed.

7:30, and all systems go! I told Atticus not to wait up, cuz Mama was steppin’ out tonight!

7:31, and the phone rings. It seems my friend has a strange flesh-eating bacterial disease and had pancake sized bruises on her legs. I tried to tell her that she’d be fine, but it’s hard to argue with necrotic breakfast food lesions on the extremities. I guess she’d just noticed them. She was out.

But my neighbors and Mr. Cool were still in, and I set off to meet them at 8:00 at a bar they had suggested.

Parking was a little tricky, so I got to the bar at 8:06. The bartender was happy to see me, largely because I was the only patron in the place. The bar was a beer bar. 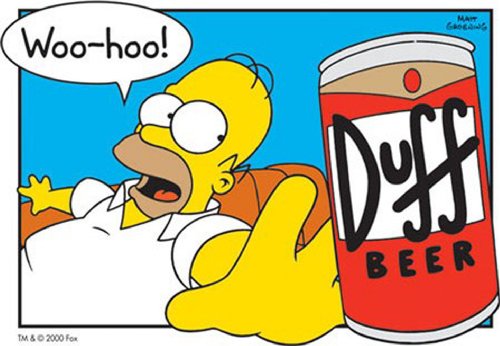 It had beers from all over the world, in bottles and cans displayed on row after row of floor-to-ceiling shelves. There were beers in coolers, beers behind the bar, and about 20,000 beers on tap.

I don’t really care for beer, or as I like to call it, “bitter liquid burp”. The bartender thought that I was just confused, and that I really did enjoy the brewskis, and lots of them. We discussed this possibility for about 15 minutes before my cell phone rang. I knew what was coming.

“Hi, neighbor!” I said pleasantly into the receiver. “Listen, I know what you’re going to say. It’s all right if you can’t make it tonight. Things happen. There’s a flesh-eating virus going around. I’ll let you borrow my cd’s, and we’ll go see the band the next time they’re in town. Talk to ya later!”

“Wait!” screamed E. Both of my neighbor’s have names that start with the letter E. It doesn’t really matter which one I was talking to, so you can picture either a man shreik or a lady squawk. “We’re still coming! We’re just late! We’re parking right now! And we brought another couple, too! Jeesh! Conclusion jump much?”

There are few things better than when resigning yourself to being ditched results in an impromptu party where you are the star. Everyone ordered a different beer, and the bartender found a bottle of Malbec in a hidden corner just for me. Cool Andy was cool, the new couple were funny and smart, and the E’s fought over who got to sit by me! Oh, how we laughed, HA HA!!! We were beautiful people out for a beautiful evening, casual and backlit by the fading light of an end-of-summer day. My teeth have seldom felt whiter, and my hair had body and shine.

After cocktails it was time to go, and so we arrived at the venue, a 1920’s converted movie theater, and, because I am the luckiest girl in the world, we completely missed the line for tickets and went right in. I heard the opening notes of a great song that absolutely does not suck dong and ran in, skipping down the aisles to bask in the musical glow with my fellow Okkervil fans.

The band was magnificent! The sound was crisp and clear and there was dancing and clapping over the head, and fist pumping. I loved it!

For three songs. Some might call it “the second encore”, because that’s what it was. We were really late. I’m not so good at keeping time, but I thought for sure someone else was. Maybe Cool Andy. As it turned out, I traded good company and a half bottle of Malbec on the patio of a beer bar for the show I had waited months to see.

Still and all, I guess it was worth it. It was an adventure. A small adventure, to be sure, and one that is so disappointingly anti-climactic there is  no way to justify an excessively long and detailed re-telling of it, but I got out, went new places, met new people, and heard some fine tunes. I had fun.

I plan to plan to do something again real soon.

P.S. If you are a member of the band Okkervil River, I think we would get along really well. We could be bff’s.  Call me!

2 thoughts on “Okkervil River, without a paddle”