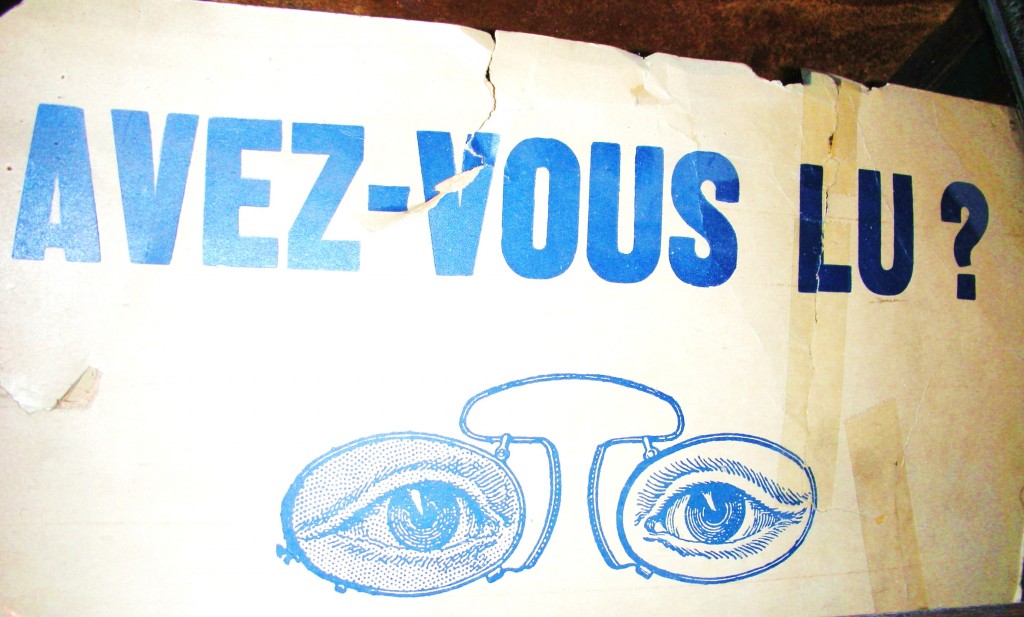 One of the clever sayings I pass on to others frequently is: “People who don’t read are dummies.” Sadly, I find myself in the dummy category for at least six months out of the year. When I am teaching, all intelligence and intellectual curiosity gets squeezed out of me like an adolescent pizza-face’s tube of Clearasil. I become beaten down by stupidity, laziness, incompetence, and tedium, and then after I have dealt with all that from the BSISD administration, I still have to deal with my students. When I come home from work, I am forced to lay around on the couch not thinking in order to replenish the brain matter that has been lost during the day. Sometimes I have to have a medicinal merlot or malbec. Or Nyquil. Sadly, this doesn’t leave much time for reading.

When one doesn’t read often, one loses the ability to focus and concentrate for a sustained period of time. The best thing about a good book is the way the reader can lose herself in it, but if one can’t focus, this doesn’t happen, and reading gets to be a chore. Every year I have to retrain myself to read. I think I have a touch of the Attention Deficit, so sometimes it’s hard for me to sit still and do one thing, and I also feel like if I don’t have proof of productivity (the laundry is done, I printed these pictures, I wrote this), I fret that I have wasted the day. It’s hard for me to actually set aside time to pick up a book and get into it.

But the thing is, I love to read! I ain’t no dummy! So Friday’s goal (which I actually did on a Tuesday and started writing about on a Wednesday, and am actually going to put out thereon a Friday, but almost a week later – I look time in the face and I laugh! Ha ha time! You’re not the boss of me!) is to read all day long, which I pretty much did. Yay, me! Aren’t I the anything-worth-doing-is-worth-doing-well-quitters-never-win-keep-on-truckin’ -really-smart-reading-girl type?! Yes, I am!

I started out by reading some stuff on the interweb. The first thing that caught my eye was an article about this: http://www.nytimes.com/2011/07/07/world/europe/07britain.html?pagewanted=2&_r=1&hp

WARNING! Rant Ahoy! Turn back now, because it’s going to get ugly!

It seems that the British tabloid, News of the World has long adhered to the practice of hacking into peoples’ voicemail in order to get ‘scoop’. They have been busted for this repeatedly; for example, actress Sienna Miller successfully sued the paper’s parent company, News Corporation, for 100,000 pounds, plus court fees, over hackings that took place in 2005. Businessweek says that she is one of more than 20 celebrities and politicians that are suing the paper, and several journalists have been arrested. The latest brouhaha (great word!) is that News of the World got caught hacking into a missing 13 year old girl’s phone. ( Later, when I watched the CBS News, they showed me exactly how to do this. Turns out it’s super easy. I don’t know if this information is on the nightly news because it’s the public’s right to know, but now there sure is a lot of the public that knows how to do it right!) When her mailbox became filled with the frantic and desperate messages of her friends and family, the paper just deleted earlier messages to make room for more. The parents found out that someone was deleting messages, and so they assumed their daughter was deleting the messages, but by then, she was already dead. That was in 2002. Today the New York Times reports that News of the World also broke into the cellphones of several victims of the 2005 London subway bombings. This is appalling to me. I am just disgusted by the lack of integrity, ethics and respect for people that this brings to light. Sure, we all suspect that things like this happen, but it’s just so dirty, and I don’t mean that in a good way! I don’t care what Sienna Miller and other celebrities say in private; often I don’t care what they say in public. Still, just because they feed on media attention doesn’t mean they don’t have the right to some privacy. And the victims of horrible crimes are victimized again, even in death, when their private messages and conversation are turned into tabloid fodder. Sometimes it’s just not worth it to get the story. It’s just not right. Of course, this leads to speculation about where we get our news and information, and how we can be sure that it is fair, accurate and unbiased. I don’t think we can be sure. It’s hard to know who to trust.

It’s easy to know who not to trust, though. Rupert Murdoch and his giant corpocracy, which includes The Wall Street Journal, Fox News, and 20th Century Fox Studios, is repeatedly accused of ethical lapses, biased media, and sometimes criminal activities. He is launching an internal investigation into the hacking thing… almost a decade after allegations have arisen. Of course this is no solution; the company will just find a scapegoat, cut him loose from the flock, and tell everyone that all is peaceful and right in the meadow. The last time this happened in Britain, the guy who was fired went on to be the communications director for the prime minister. And that’s another thing. Murdoch & Co.’s serpentine fingers, like those of other huge, multi-faceted conglomorates like Halliburton, have snaked their way so deeply into the fabric of society that they are able to control the shots in their own best interests and act with impunity.  We are all bought and sold (or we buy and sell others) for the acquisition and retention of power and wealth, regardless of the consequences or recklessness of our actions.

Sigh. It’s all so Orwellian. Or Shteyngartian.

For Rupert Murdoch to deny any knowledge and culpability is ludicrous. What an a-hole. You can read a blog post by someone who says that Murdoch is Satan here: http://thelede.blogs.nytimes.com/2011/07/05/former-editor-denies-knowing-that-missing-girls-phone-was-hacked/

Of course, News of the World or Fox News aren’t forced on people. Even when we know big business is overstepping, infringing  or deceiving, we don’t care. We just accept it and keep buying whatever is being sold, keep tuning in for more. Why? I don’t know. Because we are lazy? Apathetic? Used to it? More interested in satisfying our urges, no matter how base, than thinking in terms of right and wrong? All of us -J’ACCUSE!!!!

END OF RANT (pretty much)

I also read that in Atlanta there was a widespread case of cheating on the state’s educational standardized tests by 178 teachers and principals at 80% of the schools in the district. This does not surprise me at all. Just like I blame Murdoch for creating an atmosphere of non-negotiable ‘do whatever it takes, or else’ mentality, I blame No Child Left Behind for the actions of educators that are told that the schools will be shut down if they fail to make certain goals, regardless of extenuating factors or the feasibility of the objective. I’m not saying that anyone was right to cheat or that people aren’t accountable for their own actions, but I understand why people try to conform to set standard and expectations, even if they know that what they are doing is wrong. http://www.prisonexp.org

I had to look at some pretty pictures to cheer myself up. I do love me some real fine photojournalism, y’all. http://lens.blogs.nytimes.com/2011/06/24/a-fathers-voice-through-kodachrome/

I decided perhaps it was best that I left the Internet for awhile and read books instead. Not that books don’t possess the power to piss me off – what doesn’t? – but I still like to turn pages and smell paper. It’s soothing. Since I just finished a great novel (Shteyngart? Super Sad True Love Story? Have I mentioned it? Here’s a review not by me: http://www.slate.com/id/2262500/pagenum/2 ),  I thought maybe I’d peruse a little nonfiction. I have a huge stack of books by my bed, and I picked out three of them and read the first chapter. The lovely and attractive David Eagleman has a new book out, Incognito. 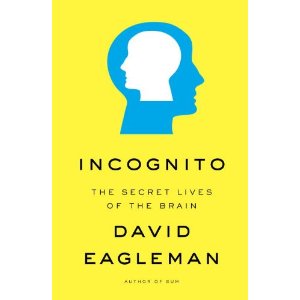 It’s about how our subconscious controls most of our cognitive reality. This book explores “the vastness of inner space.” Chapter One just kind of nutshelled the study of the subconscious from St. Thomas Aquinas in the 13th century to Freud and Darwin. I’ll let you know when this gets interesting.

Next I looked at Jon Ronson’s The Psychopath Test – A Journey Through the Madness Industry. I am familiar with his work from This American Life, and I like him a lot. His voice is honest and unassuming, and I like his dry wit. So far the book reads like a novel and I’m looking forward to reading more. And finding out if I am a psychopath.

The last book I first-chaptered is the most dense and academic, but I think I may end up liking it the most. 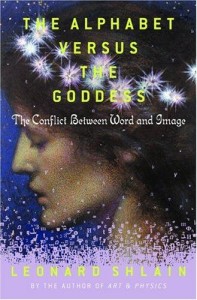 It’s about how the rise of alphabetic literacy- read “reading”- replaced the image as a method of communication, which led to all kinds of major changes in perception, and in fact, fundamentally rewired the human brain. This, of course, caused major cultural, historical and religious changes, including a colossal shift from societies that worshiped the feminine to those that revere the masculine. It’s a book that talks less about what we read than how we read, and the effect of modes of communication. Here’s a little teaser from page 7:

I don’t know if I agree with this, but it’s an interesting premise. If Shlain ends up making me a believer, I won’t have to read anymore; I’ll just look at the pictures.

I read some more stuff that day, but by now I’m sure you are bored of reading what I read and I am bored writing it. Saturday’s goal is going to be a lot less wordy, I assure you. 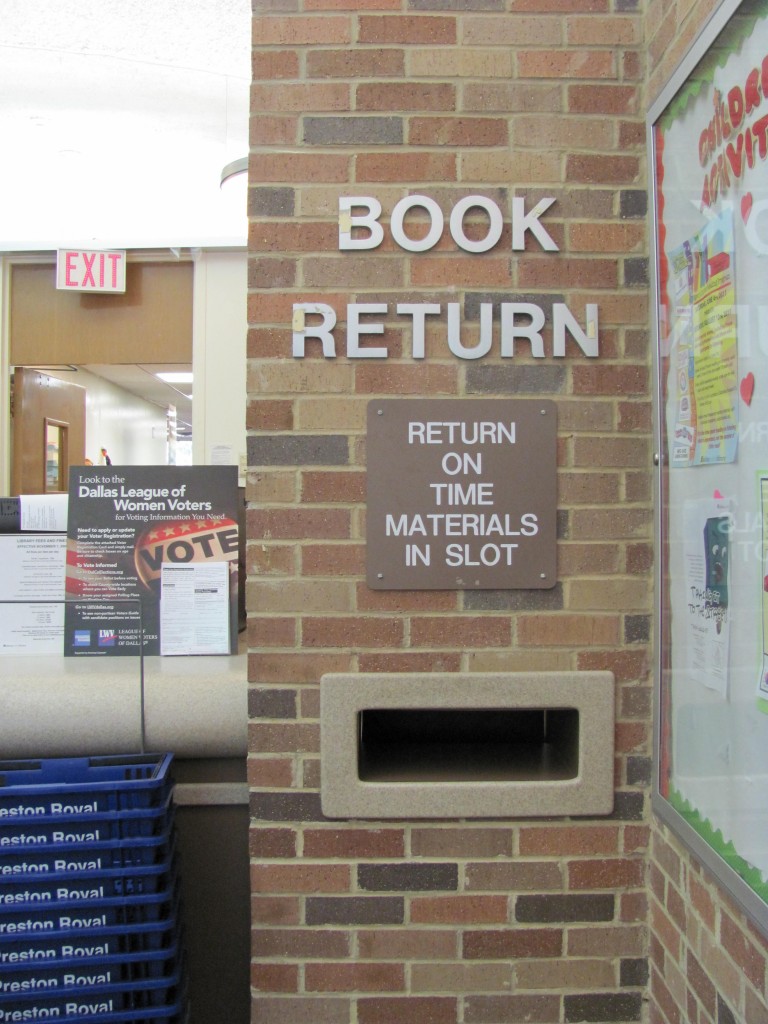 Here is a video of hoola hoops, from the perspective of the hoop. Enjoy.