Ever since yesterday, when I discovered that I am the most dedicated follower of my blog, I have been re-examining what it means to have and keep this cyber-diary. Really, why do it? It’s not a way to keep up with friends and family; I see them, or call, or even write letters, and quite frankly, even though they love me, nobody is that interested in my battles with a tomato hornworm (bastards!), or my musings on duck genitalia (though it is fascinating!), or even my handy information regarding lady pirates (aaarrrgghh!). It’s not really to get me to write; I keep a real diary, and I do write, lots. I can’t really type, so it can take hours for just one post; it would seem I had something better to do. But here’s the kicker…I don’t. I like the blog. I like to write it and read and re-read it. I like using images that I find or create, and I like putting up the work of my friends and family. I think about the blog sometimes, and I go back and look up things that interest me or I get new ideas about things I want to explore or research or write about. I write for myself, so it makes sense that I am my biggest fan. Yay, me!

That being said, I have decided to dedicate the next few posts to things that other people have said that have made an impression on me. I have done this before:
http://smalleradventure.blogspot.com/2009_09_01_archive.html
http://smalleradventure.blogspot.com/2009_08_01_archive.html
and I really like these posts, especially when my friends sent their favorite quotes in, or I got to quote them. That’s some good stuff. So send ’em if you got ’em, to my email or to the comments box, and if they’re real cleverlike, I’ll pretend like I said ’em myself.
This first one comes from William Maxwell. He was an author who died in 2000, after publishing a number of highly acclaimed novels, short story collections, children’s books, and even some non-fiction, but he was also an editor for the New Yorker for forty years, where he worked with writers like Nabakov, Cheever, Welty, Updike, Salinger, Singer, and John O’Hara. This is from his novel So Long, See You Tomorrow:
What we, or at any rate, I, refer to confidently as a memory – meaning a moment, a scene, a fact that has been subjected to a fixative and thereby rescued from oblivion – is really a form of storytelling that goes on continually in the mind and often changes with the telling. Too many conflicting emotional interests are involved for life ever to be wholly acceptable, and possibly it is the work of the story-teller to rearrange things so that they conform to this end. In any case, in talking about the past we lie with every breath we draw. 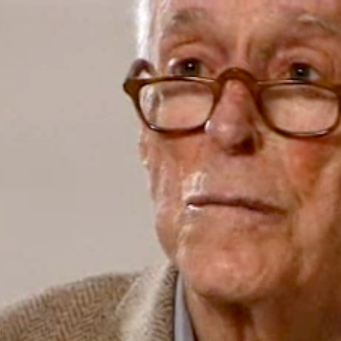 He kind of looks like Sherman T. Potter from M*A*SH, right? 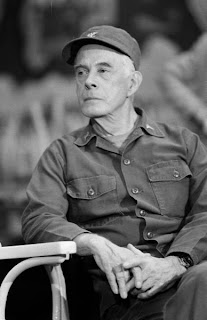 Though this idea -that memory is personal and mutable- might not exactly be a major revelation, I like this quote for several reasons. First off, it’s well said, and I enjoy both his use of the comma and the dash. Second, I am fascinated with the moments of memory, and how they become infused, in a flash, with so many factors – mood, physicality, location, what came before, expectation, desire, age – the list of what goes into a moment is endless. Also, memories are both lasting and ephemeral, and I love how they are constantly mutating and solidifying with every remembrance. They are, almost by definition, a collage of experience; ideas, attitudes, facts, emotions, images, intangibles all juxtaposed and overlapping; layers of life compacted with alternate layers of meaning, perception and misinterpretation; and all of it simultaneously retained and discarded to emerge suddenly and unbidden from the mind’s closets, maybe once, maybe again and again obsessively…well, yeah, like I said, the concept of memory fascinates me. I could go on; I haven’t even gotten started on group memories, false memories, blocked memories, memory loss, muscle memory, Alzheimer’s, dreams, or memes. Some people have ubermemories, some have synesthesia which gives a whole new spin to memory, and some people can’t remember faces, so that they constantly fail to recognize the people they love. Dang, y’all! Is it any wonder that when I am thinking about all of this, I forget to flush the toilet, turn left, or call you back? I got a lot going on in here, people!
Third, I like the idea of a storyteller rearranging memories – even if they are not her own- so that they fit into a format that is “wholly acceptable”, even if that means changing or imagining an entirely different story than what was inspired by the original moment that had to occur to set the ball rolling. The storyteller creates a new scene that will go down in the memories of the readers; one memory gives birth to unlimited possible new memories. It’ so Proustian, and also so Beatlesque; after all, “There’s nothing you can know that can’t be known/ nothing you can see that isn’t shown….”, but oh, the things we can create from what we already have!
Finally, I found this quote at the front of a fantastic book called Dancer, by Colum McCann, who also wrote Let the Great World Spin. I really liked Let the Great World Spin, but I loved Dancer. It’s about Rudolf Nureyev, and it’s brilliant. I think McCann is such a wonderful writer. I could go on and on about him, also…he’s just so good. He’s also my kind of F-I-N-E, fine. Grrrr, in an intellectual kind of way. You should read his stuff, really. 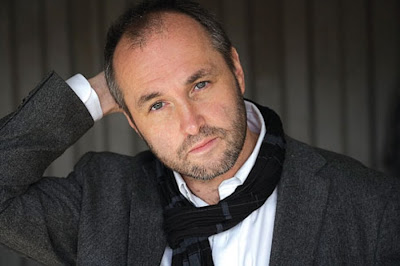 The next one of his I’m going to read is Zoli, which is about a gypsy. Then the new one by DeLillo. But before all of those, my Mom’s memoirs, which, as you might recall, brings us nicely back to Maxwell, on memories.