Part Two
El Deonte flipped on his belly and went down, down, down, deep into the water, past the AFL, past the NFL, past majors and minors, 20,000 leagues under the sea. He stopped to snatch a snack from the octopus’s garden and paid a call on his friend Nessie, who was very shy and refused to let herself be seen. El Deonte took them to a pineapple under the sea where we all had a sponge bath and felt very refreshed. We met creatures and crustaceans, anemone and abalone, sharks and sashimi. We swam through tunnels and through caves, over underwater volcanoes and under overwater…well overwater nothings, because we were trying to get to the bottom of the ocean. It was a lot of fun, but HOOOEEEE, were we tired. I was just about to give up, and I think Finn was, too. He had taken to singing nothing but Louie Prima songs and counting to 100 by fives, which can be fun, but after awhile it gets really annoying.
Finally, just beneath us, we saw it, glowing gently from the light of a thousand electric eels: The ocean floor! It was beautiful!

Grasses swayed. Corals reefed. Bright, unexpected colors emerged and then blended together, swirling and changing. There were hills and valleys, an endless landscape of enchanted beauty. Finn and I were so impressed that we couldn’t speak, until finally he sighed, “Awesome,” and for the first time, I thought I understood what that word really meant.

“Well, see ya!” El Deonte did a dorsal dance and with that, he was gone. Just like that.
Finn and I looked at each other and then out over the ocean floor. It was so still, so quiet. I have to tell you, I got a bit frightened, and I felt very lonely. Finn looked like he had seen a ghost.

Slowly our eyes adjusted to this strange, new world. As we became able to focus, and grew more familiar, we began to see all kinds of marine life, camouflaged, and hiding in plain sight! Finn threw back his head, which is to say he did a backflip, as he has no real body to speak of, and took off after a catfish. I hopped on a friendly seahorse and followed. Oh the fantastic sights we saw!

We whisked over a beach where the sand was so white it looked like sugar and saw Scarlett Poyntz, superstar, catching a few rays – gamma rays, I think they were.

We saw a fish who said that if we followed him and did whatever said, he would hang out with us forever. I thought he was a sucker, and so we moved on.We saw cheerleader fish with pompoms on their noses…

There were model fish in bright designer dresses, running away from phishtographers …
There were crazy, vibrant colors and whooshes of sound and sparkle. We saw things I couldn’t name and could never have imagined.
I saw a pointy spine fish….

The bottom of the ocean was AMAZING!
But what about the oil spill? Could it cover our deep-sea paradise like a cloud of black smoke? 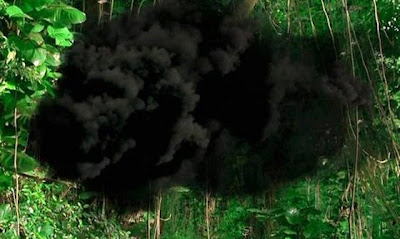 Would fish of the future have to mutate and evolve in strange, scary ways?Or perhaps, will fish have to find smaller, new places to live?Finn doesn’t believe any of that will ever happen. I’m going to agree with him. After all, how many talking dogfish heads do you know? He is as wise as he is strange. Still, I’ll never forget this journey. My memories will always make me laugh and wonder at the beauty and diversity of nature. Finn and I are going to take care of our earth and figure out ways to make sure that it is safe and protected. Stay tuned for our next adventure!
P.S. for E.: POOP! I think you are groovy!
P.S. for A.: Almost time for a ride around the lake! I can’t wait!