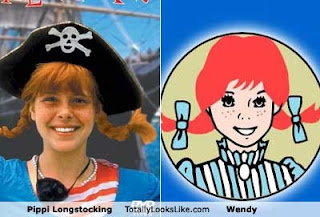 March 10th was International Woman’s Day. I am a woman, and I did not feel celebrated at all. No cards. No cash awards. No one asked for my acceptance speech -believe you me, I had a thing or two to say – and I had to make my own statuette out of a toilet paper roll, glitter and a rock. Still and all, I thought I’d pay a small homage to the ladies, because I’m a fan. Chicks are cool.
My favorite ladies are the ones in my family. My mother and my sister are my best friends. My mom is a poet and a lover of words, though she’s not so good at remembering them unless they are her own. When she sings, she doesn’t pay any attention to the logic of the lyrics. Here’s how she sounds when she sings the Beatles’ classic “Octopus’s Garden”: “I like to be/between the sea/ or in a tree/with some shade…” She loves me, loves me, loves me, and tells me so every day when she calls to wake me up in the morning – that’s right; she calls every morning to make sure I am up in time for work. We go to movies and on walks, talk about love and life, and are each other’s first reader whenever we write something we think may be worth reading. My mother is gorgeous, and I get sick of boyfriends telling me so. Some apples fall farther from the tree than others. She recently said, “I am an oyster and the world is mine!” I don’t know what this means, but I wrote it down in my diary and never forgot it. She is my favorite.
My sister is funny and beautiful and smart. She is relentless in trying to do what is right and she absolutely makes me a better person. She takes care of me and makes me feel like a special guest star, an unexpected treasure, a wise confidante. She hates anyone who is mean to me and makes me laugh with my head thrown back and my mouth wide open. She is absolutely politically correct, but can’t help but sometimes call me gay, which I’m not, though I fear her husband may be. Not that there’s anything wrong with that. When I cry, she makes me feel better, and she is the finest chef I know. I adore her.
I could go on with the ladies in my family; I come from a long line of strong, opinionated women, and I am proud to be linked to them. I could also talk about my girlfriends, who are fantastic; mothers, artists, singers, writers, legislators, advocates, teachers, athletes and queens. We laugh and cry and sing and sweat and hope together; I would be lost without them. But I don’t want to talk about the m now. I want to honor…….drum roll, please….. LADY PIRATES!!!!!!!!
There are LOTS of lady pirates, matey. Oddly, they are mostly Chinese. I don’t know why. The first legendary buccaneer bitch goes back to 600 B.C. The Greek sea-farer Dido, or Elissa, founded Carthage. Here is a picture of her lounging: 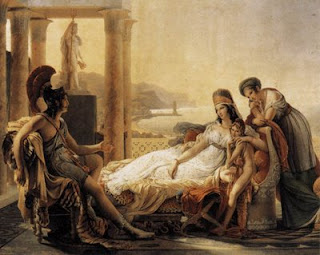 There are a bunch of Viking Princess pirates – they look like Pippi Longstocking with eye patches and horn-helmuts . Pippi, of course, became a business woman and started a chain of fast-food restaurants, but that has nothing to do with piracy. There were French female pirates (ooh la la!), and escaped slave women pirates and a woman named “Gunpowder Gertie , the Pirate Queen of the Kootenays” from Canada. I knew Canadians had kooties, but I waas unaware that they also carry kootenays. My favorite piratesses, though, were the renowned Mary Read and Anne Bonney, who dressed up as men and fought and drank and swore and carried parrots with the best of them. They were fierce, I tell you; Mary Read once fought a man to save her wimpy sailor lover and Anne Bonny baffled a boson (whatever that is!) by baring her bound boobies during a duel and yelling “Ha!” He was so surprised by her clever cleavage camouflage that he didn’t even get a word out before she skewered him with her sword. Bad-ass! Bonney and Read found themselves on the same ship in the Caribbean; one tried to seduce the other, who happened to be married to the captain, Jack Calico, and when the first revealed her true gender, the women became lovers; that’s right: lesbian pirates!! You can’t beat that for box office gold, ladies and gents! (Maybe my sister is right; perhaps I am a bit overly enthusiastic about lady pirate love!) When their ship got captured they both “pleaded their bellies”, and, as it turned out, they were both six months pregnant, so their lives were spared. That’s right, folks! Bisexual sea-rovers, the lasses were! Really, you can’t beat that!!! Aaargh! These ladies shook their pirates booties and MESSED STUFF UP! I wonder if when they washed up on islands and came down off the ship onto terra firma, people referred to them as land hos. Get it? Anyway, I think they were the scurvy scourges that Johnny Depp and Keith Richards (who, in an unrelated story, snorted the ashes of his father and then TOLD A REPORTER ALL ABOUT IT!!) were trying to be in those stupid movies.

I like these women because they reveled in who they were. They were different, and they went through hard times, but they found ways to be happy. Sure those ways included murder, pillaging, cruelty and plunder; I’m not so into that. But still they were unique and interesting, like Dorothy Parker, or Zora Neale Hurston, or Fiona Apple, or Marlena Dietrich, or Marie Curie. They changed how we thought about things, like Ayn Rand or Ethel Rosenberg or Margaret Sanger. So many women who paved the way for me to be how I am, who I am. Like I said, there’s a long line of strong, opinionated ones. Happy Day Of the Women, everyone!