Editor’s Note: I wrote this a long time ago, way back when I was on summer vacation and the living was easy. Then I started stupid work again. The transition made me senile and I never actually posted it. Nobody commented on that which wasn’t there, so I sank into a depressive stupor under the weight of the rejection and feelings of alienation I felt, as I am wholly dependent on the validation of cyber-folk, and why not?  They are all prescient, insightful,  skilled and supportive at all times. Without cyber comments, love, and web- concern, I am nothing, and life is but a metronome, ticking by, keeping the time, filling in space, but without meaning or melody. I don’t know how long I can hang on.

#1. What I did today: Today I ate some honey. I don’t have much of a sweet tooth, but for some reason at around 2 o’clock this afternoon, I jumped off the couch, bounded into the kitchen, and squeezed a sticky golden orb on each of my fingertips from a little plastic bear. I held my hand up to the window, admired how the honey glowed in the sunlight, and sucked a sweet blob off my fingers, one at a time. Yum.

Did you know that honey is made from bee puke? They ingest the nectar, which I guess is made up of pollen, and then regurgitate it, repeatedly, from their ‘honey stomachs’, which sound a lot cuter than they actually are, and then spew the partially digested food source into the little containers of the honeycombs, which are individual, snack-sized, vacuum-packed, puke pouches.

Not so yum, right?

Perhaps you knew this already. Zach#1 did.

There you have it. Another productive day in my life.

#2 – Fact: The average American flushes the toilet at home five times a day. That equals 18.5 gallons of water per American, per day, and that is only if the person only relieves him/herself at home. When you do the math, and trust me when I say that I did NOT, that equals 5.7 billion gallons per American at home, per day. All that water flushed down the drain. To put this in global terms, that’s mas agua than than all the homes in the UK and Canada use in a day for ALL of their water needs – cooking, cleaning, bathing, drinking, etc.- combined. Right now 40% of the world’s 6.9 billion people don’t have access to clean water, and by 2050, it is estimated that there will be 2.4 billion more.

I’m not saying don’t flush. That’s yucky. I’m just askin’ you to consider the if-it’s-yellow-let-it-mellow theory. Don’t waste water. Actively think of ways to save and reuse, or restrict your water consumption. It’s important. (Facts from The Big Thirst, by Charles Fishman, 2011, brought to me by way of KB. Thanks KB!)

Here are some bathrooms I have frequented lately. I’m pretty sure I didn’t flush in all of them. 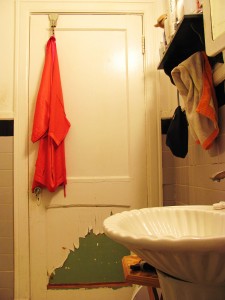 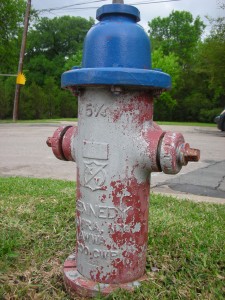 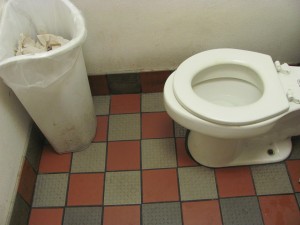 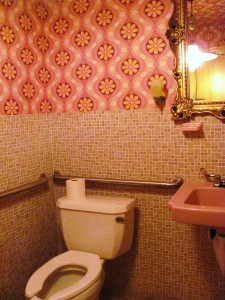 #3 Cassandra Strummer: I think it is fairly obvious to most everyone that the Clash are prophets. I’m talkin’ crystal-ball-future-tellin’-they-just-KNOW prophets. Naysayers to the band as soothsayers concept need only revisit the lyrics of the iconic “London Calling”:

London calling to the faraway towns/Now war is declared, and battle come down…

The ice age is coming, the sun’s zooming in

Don’t you get it? All this stuff has come to pass! Every bit of it, unless you are a Tea partier and don’t believe in global warming, the inevitable effects of dependence on fossil fuels,and the drought and famine that threatens to wipe out civilizations, as is currently happening in places like Somalia, that nuke meltdown in Japan; this shit’s real, dude! The Clash is Nostredamus, man, they are totally 2012, FO SHO! And what’s more, this ditty is the siren’s song for the 2012 Olympics, that are being held where? Oh yeah, let me hear  it…London Calling, baby, that’s what I’m sayin’! Never mind that its message is a lullabye of doom, complete with zombies and rioting teen-aged hooligan boys and girls coming out of the cupboards (gay zombie hooligans? Yikes! The worse kind!), it is the official song of the corporatization of corporal competition, and the Clash knew it would be someday…the prophets of profit, cash for Clash, I tell ya, and they deserve every Euro-tuppence they rake in…

#5 – What I am reading: Cloud Atlas, by David Mitchell. People, I am loving this book. It took me awhile to get into it, but now I am halfway through it and fully invested. I’ve never read anything quite like it. Or the Shteyngart book. Or Dancer, by Colum Mcann. Those were some real fine books, I tell you what. I know that when I tell you about these books, it doesn’t make you want to rush out and read them. But you should. I’m lonely and I want someone to talk to about these things that impress me so. Do it! 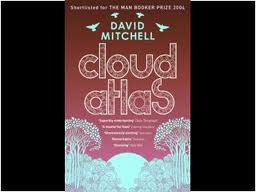 Cloud Atlas is going to be made into a movie with Tom Hanks, Halle Barry, Susan Sarandon, and other folk. I can’t see as it won’t suck, but I’ll probably still pay to go see it.

Laters, Peeps! Try not to overheat!