A friend of mine recently informed me that when I post a lot of pictures, it takes forever to load. That must be a real drag for you, my faithful readers! I did not know that this was the case, and I do apologize for any inconvenience the wait must have caused.

Then again, what’s it to ya? Like you have anything better to do! Plus, one cannot discount the rewards of being patient! And judging from your total lack of commentary on the last post, I  infer that you were left speechless by the Artoween exhibit I posted. I s’pose that ought to hold ya, and you are welcome.

Anyhoo, I consulted my web guru, chmchm, who told me that in order to fix the picture problem, I would have to…well, I don’t really know what she said. It was a lot of technical blah blah blah about pixels and software and uploading, and I quit listening right at the beginning. She’s working on it. ‘Nuff said.

In the meantime, I have a bunch of unrelated odds and ends. And no pictures. Which is a shame, because I have a photo essay called “State Fair” all ready to go. If you are thinking that it features snapshots of Big Tex’s penis (also named Big Tex), you got another thing coming, perv.

Here is the first thing: If you like photos like I do – and I do enjoy the photos, I must say – then check out the pictures at this site:

I clicked on ‘all submissions’ and sat transfixed in front of my computer for an hour. They aren’t all great, but all are good, and they inspire me. People are so cool and creative, and there is so much beauty, interest and wonder to be seen, everywhere, in the oddest places, in the span of a moment, in the hint of nuance. Check it out and let me know what you think.

Here’s another thing: sometimes seeing things clearly really sucks. The times you walk past a mirror and see how non-sexy you really are. The many instants when you think you are basically an undercover bad guy. Not a bad-ass guy; just bad. The hours you spend figuring out what you should have said. The people you care about who you have let down. The hours spent wasting time. The hours you won’t get back. The missed opportunities. The words that should never have come out. The self-sabotage. That you record ‘Glee’. All the times that you have been petty, or yield power only to prove that you have it. Realizing maybe you really were just controlled by hormones. Understanding why, way too late. Being short-tempered and impatient, even when you have nothing better to do.That you are getting older, but perhaps no wiser. Epiphanies, like: Fat never sleeps. Nothing you can sing that can’t be sung. Maybe this is it. Everything dies.

Grades are due and my insomnia is back full force. Can you tell?

I wrote this when I was trying to rhyme, but not be trite. I’m not sure that I succeeded. What do you think?

I think you have a sexy mind

Swim in your moods all the time

And consider the me

That you think you see

She’s all wrapped up

I take your ideas

What I want to hear.

I wanted to be Tipsy Hedren for Halloween, because I don’t really like birds, and I do really like being tipsy. 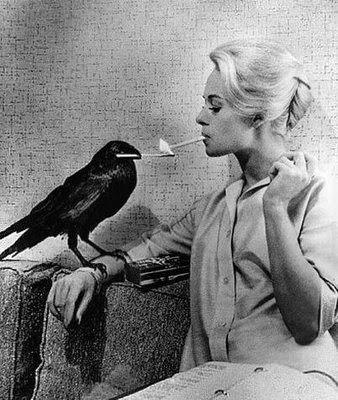 How drunk do you think you’d have to be to let a no-good, lying, backstabbing bird light your cigarette? Jeesh!

Here are a few things I overheard:

“My sister is mean and stupid. She broke her finger poking a fat kid. See what I mean?”

“We had a big Halloween candy exchange. my kid said, ‘I’ll give you two lollipops for a Buttfinger! Haha! A Buttfinger!’ I never heard that in all my years!”

I definitely have a touch of dyslexia. And narcoleptic insomnia. And hypochondria. For sure.

Once riding in old Baltimore,
Heart-filled, head-filled with glee,
I saw a Baltimorean
Keep looking straight at me.
Now I was eight and very small,
And he was no whit bigger,
And so I smiled, but he poked out
His tongue, and called me, “Nigger.”
I saw the whole of Baltimore
From May until December;
Of all the things that happened there
That’s all that I remember.

If you told me Rick Perry was NOT high most of the time, I would find that very hard to believe.

Well, I think that’s about it. I have a ton of grading to do. But I think I’ll watch Glee first, even though the singing really bugs me sometimes. And also the story lines. But I like that girl who believes in unicorns in Britney Spears.

Have a great weekend, one and all!