Good Morning! It’s 11:00 a.m. on a magnificent November day. The sky is an almost unbearably piercing blue, the grass is getting crunchy under my feet, and there is a crisp sense of clarity and possibility riding on the wind. I’m still in bed under a cloud of covers, drinking my coffee, enjoying the promise of a big, wide-open day. I love this feeling!

Some of my students forced me into having a book club, and the first one I made them read was one that McAdams turned me onto about five years ago. It was classified as a young adult book at the time, but evidently someone read it and decided that even though it deals with all of things that make young adulthood such a surreal, confusing time, those types of themes are too mature for that age group, so bookstores have moved it to the adult literature section. This is all fine with me, as I am well past adolescence, and would prefer to read only big girl books at this point, so I need Border’s to remind me what is appropriate for me. Anyway, I remember really liking the book, but I forgot why, on account of I dismissed it because I am an adult and it was for kids, so now that it is an adult book and I, too, am adult, I am re-reading it and can proudly tell you why I like it so much.
The book is called the perks of being a wallflower, and it’s by Stephen Chbosky, who doesn’t believe in capitalizing titles. (You grammar goons got all excited, thinking you had caught me! Ha ha! Foiled again, suckahs!) It’s a classic, and it’s going to be a movie with Emma Watson and Logan Lerman, next year, I think. 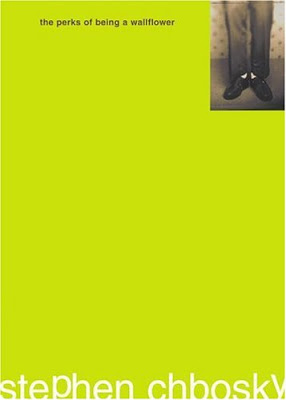 By the by, I hear Colum Mcann’s Let the Great World Spin is going to be made into a film, with J.J. Abrams of Lost fame producing. You heard it here first! Finger on the pulse, right?

Anyhow, so this wallflower book is really good, and my students love it, and it just adds to their growing realization that I am the coolest teacher ever. I am enjoying the re-read, and I am finding elements of great beauty and resonance that I probably missed the first time. For example, today I read page 33. Here is a portion of it, reprinted without permission. If Mr. Chbosky asks me to, I’ll remove it, but if you don’t tell him, I won’t either. By the way, for those who are purists, the ellipses are mine.
There is a feeling that I had Friday night after the homecoming game that I don’t know if I will ever be able to describe except to say that it is warm. Sam and Patrick drove me to the party that night, and I sat in the middle of Sam’s pickup truck … the feeling I had happened when Sam told Patrick to find a station on the radio. And he kept getting commercials… and a really bad song about love that had the word “baby” in it… and finally he found this really amazing song about this boy, and we all got quiet.
Sam tapped her hand on the steering wheel. Patrick held his hand outside the car and made air waves. And I just sat between them. After the song finished, I said something.
“I feel infinite.”
And Sam and Patrick looked at me like I said the greatest thing they ever heard. Because the song was that great and because we all really paid attention to it. Five minutes of a lifetime were truly spent, and we felt young in a good way. I have since bought the record, and I would tell you what it was, but truthfully, it’s not the same unless your driving to your first real party, and your sitting in the middle of a pickup truck between two nice people when it starts to rain.
And that’s just part of page 33. Pretty deep for a young adult. Do you think they get it?
One time, when I was in high school, a group of us broke out of our teenage apathy and went to this apartment complex called “The Bluffs”, so named because it was built next to this big, rocky, cliff-like formation. We live in one of those cities where there’s not all that much real nature, so we were drawn to the fake nature, and it seemed good enough to us. We stood in a circle at the foot of the bluffs reading the sign that forbid us from entering, and got high. Then, like a bunch of ants, we climbed over the fence and swarmed the bluffs. I remember a blur of high tops and denim, and hands reaching down to me, and me pushing someone up from behind, and the long, straight, blond hair and Pepsodent smile of the head cheerleader, as she clapped when the fat, pimply-faced, funny kid looked over the rim of his glasses and said, incredulously, “I made it!” I was a freshman and they were all seniors and I couldn’t believe how lucky I was. We sat at the top of the chalk hill on a cool night and looked at the cars on the highway and the lights of the city. I was cold, and the boy who was my first true love held my skinny hand in his big, warm one. We all sat there, boys and girls with different stories, suspended for a moment between the present and the future, before my friends graduated and went off to real life, and I flunked out of that school and was transferred to a new one, and The Bluffs were torn down to make the parking lot bigger for the shitty apartments that would soon be torn down, also.
We climbed down, slowly this time, and sat in the car with the heat on, and silently passed around another joint, and listened to Pink Floyd’s “Time” from Dark Side of the Moon for the billionth time, and were so simultaneously alone and together in our thoughts that we all jumped when the bells go off at the end of the song, truly surprised, yet again. We laughed and poked each other in the ribs and decided to go get something to eat.
And then, I felt infinite, because I had shared time and been young and grown up and scared and cold and proud and warm, and had seen that maybe there was and would be sadness around, but also, great joy. There was the fierce pain and indescribable beauty of “fleeting”, and also, I knew even as the moment sparked, burned, and fizzled out, that it would be with me forever. I knew that things were going to change, and that they always would, and that glimpses of perfection were flukes, impossible to produce or replicate, but that there is great security in the knowledge that perfection is out there, and every once in awhile, it will find you. It was too much to fully take in, and I’m glad I saw it then through a bit of a cloud, but now, it’s sharp, and focused, because memory has diluted it to the purest essence.
Time in a lifetime truly spent. Who doesn’t get it?
Today I have a big, wide day ahead of me. The sky is blueblueblue and life is bigbigbig and I am sososo happy to be living mine.

BONUS: Let the Great World Spin combines stories that converge, if only momentarily, when Philip Petit walked across the Twin Towers on a tight rope in 1974. This picture is a still from the documentary Man On A Wire by James Marsh. Isn’t it amazing? 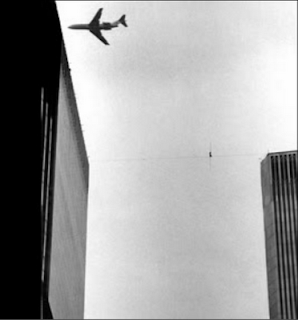