“As we express our gratitude, let us not forget that the highest appreciation is not to utter words, but to live by them.”   – John F. Kennedy

Ok. Perhaps this is not JFK’s most important, nor most eloquent, nor most profound quote. Still, on the 48th anniversary of his death and the cusp of the Thanksgiving holiday, it’s pretty timely and relevant.

There are many people, both famous and ordinary, whom I admire. As I get older, I am more inclined to admire people who try to be good. Being good is not as easy as it sounds. Things (pettiness, jealousy, inhibitions, confusion, apathy, ignorance, blame, fear, insecurity, and lust for revenge, power, acceptance and wealth, to name just a few) get in the way.

Not too long ago, I wrote a post on being engaged. I feel that if you notice what’s going on around you, if you make connections and seek ways to be a part of the great big dynamo hum that is the universal beat, or the oversoul, or the what-lays-underneath of all life, then you will be happier, and you will make others happier in the process, and really, that’s what it’s all about. I’ve never really thought about this in terms of actual words, but yes, this is what I believe.

Anyway, I used to go to Starbucks a lot, and then less, and then not too much at all. Eventually I only went there when I didn’t have time to make my morning vat o’java before work, and had to rush in or spend the entire day decaffeinated, which is a misery on par with hearing Garrison Keillor sing a seemingly endless cover of The Grateful Dead’s “Ripple”, which is heinous on too many levels to adequately discuss at this juncture, but which actually happened on Sunday, and, let me tell you, was traumatic. I’m still getting flashbacks. But I digress.

So, I’d get to Starbucks all in a hurry, with my hair wet and more often than not with my shirt on backwards, and I’d be pissed because it’s morning, and angry because my job sucks, and also already late. And I’d go to get my coffee, and there was this bum, sitting in a wheelchair, like a one-legged lion in wait, ready to pounce on cranky, morning-weak, bedraggled prey. I knew what he wanted. They all want the same thing. And just because I looked like someone who can’t manage to set a damned alarm clock to wake up and get my ass in gear at the same time I’ve been supposed to be getting up for 15 years doesn’t mean I am a pushover.

“Mornin’,”  I grunted, eyes down, fists jammed in my pocket.

“Looks like it’s going to be a beautiful day!” he’d croon, and I knew what was coming next.

“Sure am glad I’m here and not in Washington, DC,” he’d say. “They have a real mess on their hands there. I’m just happy to be here now, takin’ in the day. Hey! I hear they’re introducing a special Pumpkin Latte Soy Macchiotta! You ought to go in and try yourself one! Have a nice day, pretty lady!”

That dude was smooth.  I said goodbye and went in and bought my coffee and left. He didn’t panhandle me. He smiled and waved goodbye.

All day it stuck with me. I felt guilty and small. He was a nice man, and if he needed a dollar, for whatever reason, well, hell, I have a dollar. Maybe I am a pushover. Still, I felt like I missed an opportunity.

I went back the next week, and the next, and he was always there, and always so nice to me. “Hey, Miss Blue Car! How you doin’ today? Think it’s goin’ ta rain? We could use a soakin’ right? I tell you what, you look like sunshine on a cloudy day! You know that song? I got sunshiiine, on a cloudy dayeeyay!”

It got to where I looked forward to see him.

One day, I asked inside if I could buy him a sandwich and a coffee, or leave a gift card for him. The Starboy said, “Sure, if you want. But he has enough gift cards and sandwiches to last him all winter. People love Mr. Jones. Go sit with him awhile. He likes that.”

Mr. Jones. I would sit with him. Some day. When I had time. What a nice man was Mr. Jones.

Winter came and I set the automatic timer on the coffee pot and slept in. I was still late, but the coffee was hot when I got up. Hot and cheap. Like I like my men. But I digress.

One day in the summer, I made it back. On the little table where Mr. Jones sat, there were a bunch of papers. A shrine. There were letters like this: 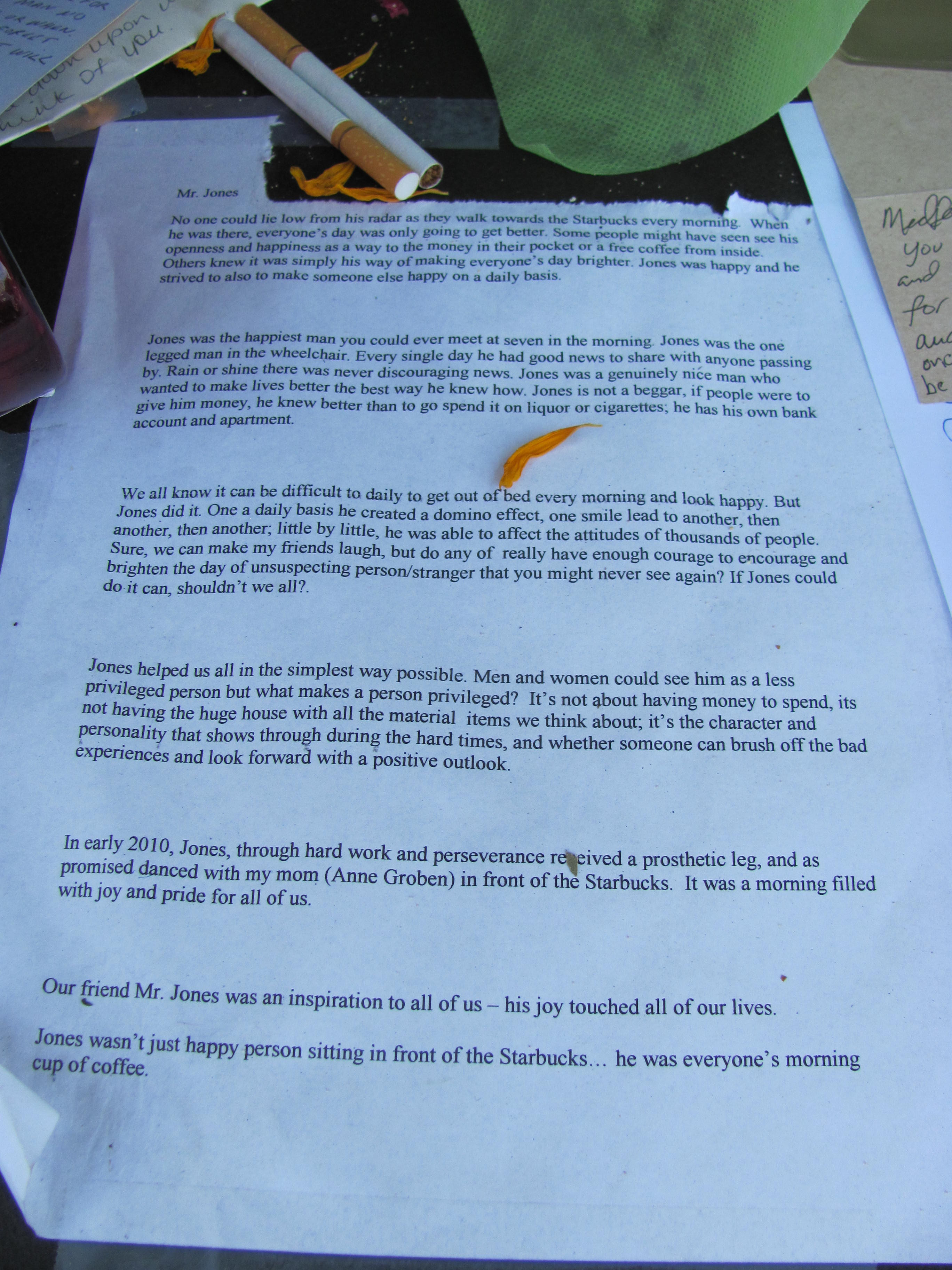 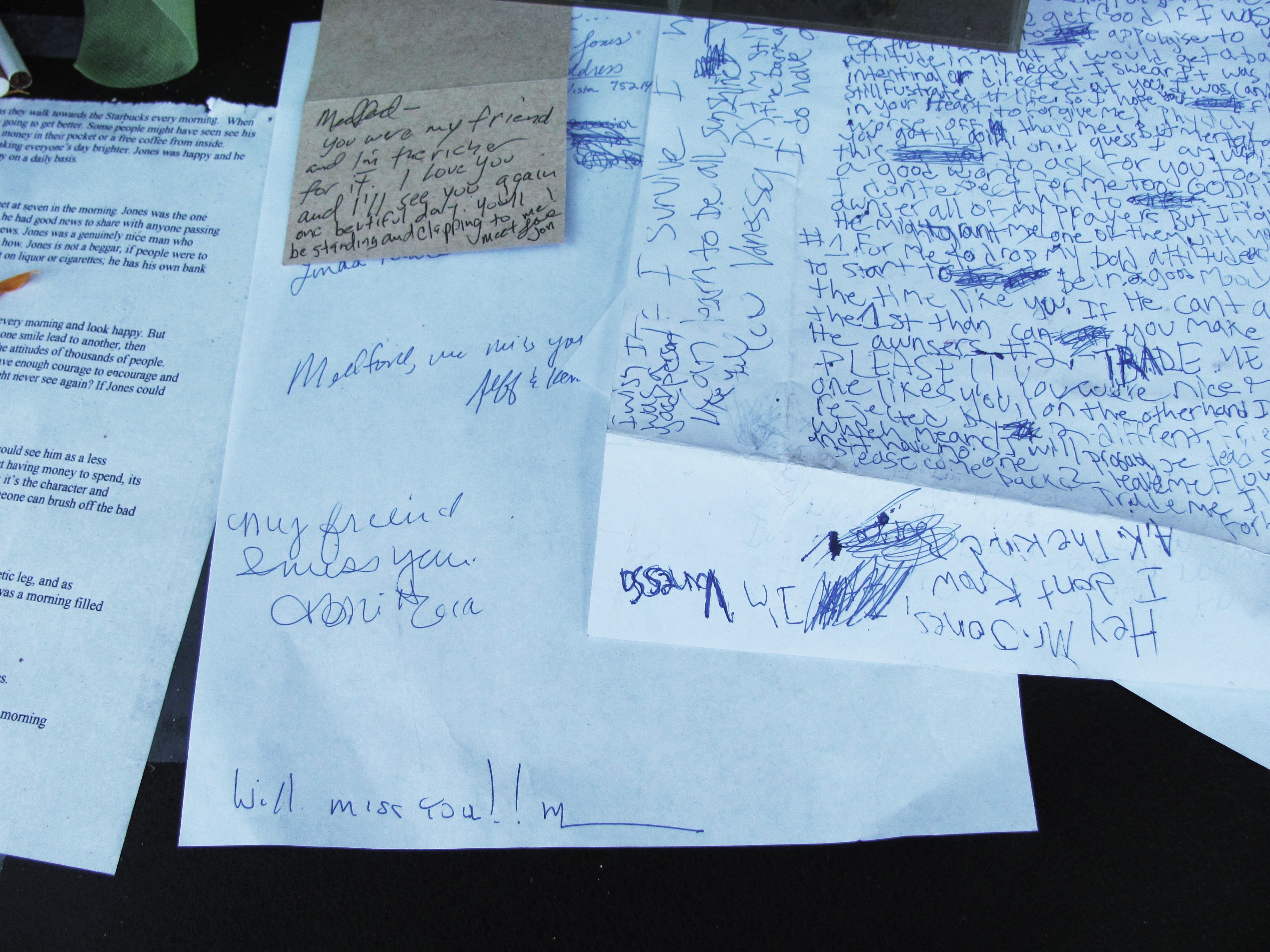 The one on the right is hard to see, but it’s from a girl named Vanessa who got angry at Mr. Jones when he refused to give her money for heroin, so she robbed him. The letter was so poignant and personal that at the time, I didn’t have the heart to photograph the whole thing, but now I wish I had.

Medford Jones was a man who gave kindness to people whether they wanted it or not. He was paid for this service, not because people felt obligated, but because with connection comes kindness, understanding, and the desire to make things better. He was engaged, and the simple act of reaching out and connecting to others made him respected and admired. I am so grateful for my life, and the people who drift into it to teach me things, and to love me, and to grant me gifts and wishes. I am so lucky. I must remember to show my gratitude not just in words, but in action.

Thanks for the inspiration. 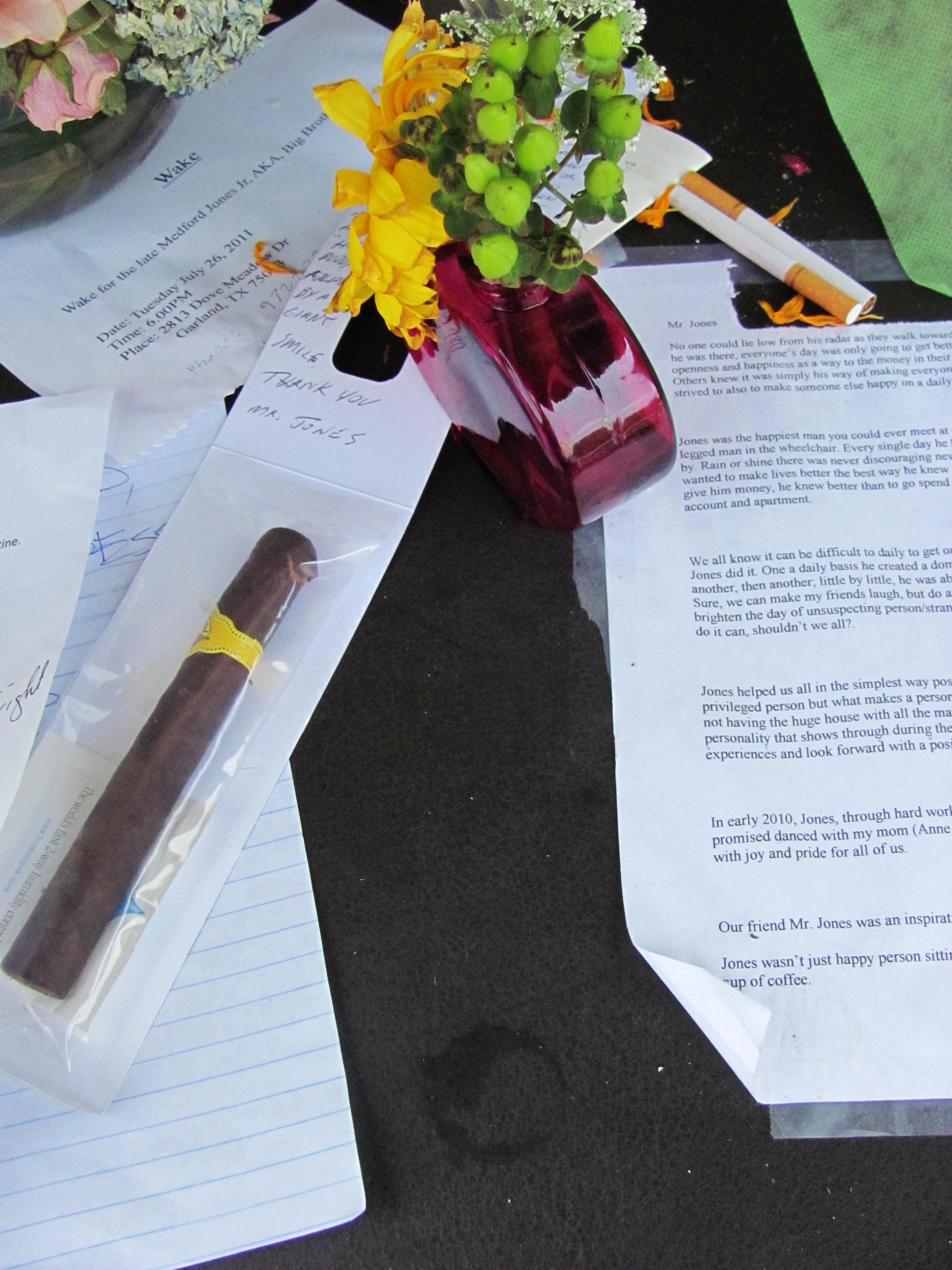