First of all, this happened: I fell into this really weird deja vu soma-state where somehow, I watched five episodes of Friends, back-to-back. I don’t know how it happened. I didn’t plan it. It was like a blackhole vortex. I couldn’t keep myself from being sucked in. I’m a strong, independent woman, but somehow, this was beyond my control. In my defense, it was the plot line where Joey Tribiani fell in love with his then-roommate, Rachel, who, of course, was pregnant by her ex-lover and his good friend Ross’s baby.* Oh, the awkward hilariousness that ensued from that crazy love triangle! Who can blame me for my mesmervision? Who could peel her eyes from that?

The only thing that saved me from a sleepless night in front of the 1990’s was that at a commercial break I accidentally switched to the Lifetime Channel and caught a few minutes of “The New Newlywed Show.” That’s like a tsunami on a candle. The wholesome glowing warmth I felt for my friends (Chandler Bing! Aren’t you a funny one?!) was instantly replaced with a fear that bordered on panic for the state of the future. New Newlywed people should NOT procreate, no matter how badly they tell the viewing audience they want to. Really. 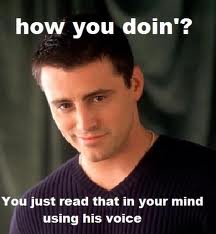 Also, there was this:

Me: So, Julio, do you understand simile? Can you make up an original simile?

The class goes nuts. We’ve been over this 20 times. Julio wasn’t listening, because he was texting Gabbi under his desk while he was supposed to be taking notes. We have been following this conquest for at least three weeks, which in teenager-time, is – well, it’s half a six weeks, which is a long-ass time. Julio doesn’t stand a chance with Gabbi, but he’s not one to give up easily.

School is like sex: you never really get it, but you pretend that you do.

That Julio is brilliant. A philosopher, I tell ya. he’s going to do great things some day…but he’ll never do Gabbi. Fond, fruitless wishes, that.