Since I haven’t had the chance to do much travelling this summer, I’ve been asking everyone who is going somewhere to bring me something he/she finds on their trip. My neighbor Emmy went fly fishing in Idaho (no, you da ho! That never gets old!), and guess what she found for me… 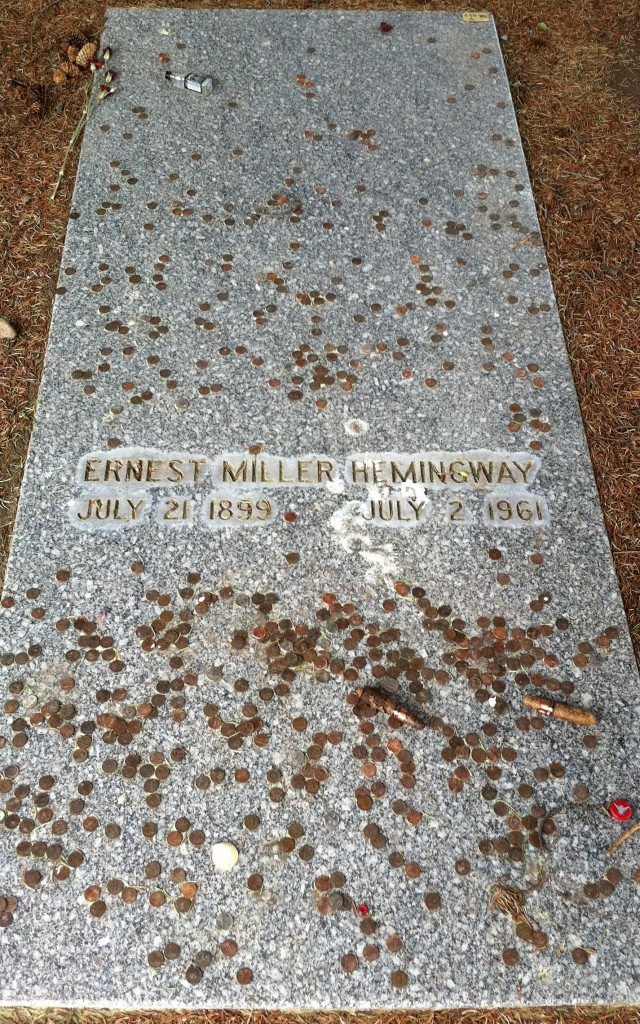 Why, it’s Ernest Hemingway’s grave! Fantastic! Look at all the things people leave; cigars (Havana’s, maybe), bottle tops, Jack Daniels (noticeably empty), and lots of pennies. I had to look up why the pennies. There are lots of theories, (http://www.ehow.com/facts_5241692_pennies-left-grave-markers_.html) but I think my favorite one is that they were left by people who wanted a favor from Papa. I can just picture some skinny, broke-ass, frustrated writer going to Ketchum and wishing on a penny for a big break, knowing it’s not going to happen, but kind of believing that it will.

Anyway, I thought this was a great gift. (She also brought me “gunpowder green tea”, which I haven’t tried yet, because I am a pacifist, and salt from Utah that is beautiful; it’s pale, pale orange with flecks of gray and white, and it tastes extra salty.) I hope she goes somewhere else soon. My neighbor on the other side, Todd, went to England and got me a little sump’n — sump’n, too. I don’t know what it is yet, but it will probably be mildly pornographic, and I’ll probably like it, also.

With all this gifting, I decided I wanted to be a giver*, but what more can I give you people? I give you my soul in every post – what else do you want from me? You have my words, and, as Hemingway said, “All our words from loose using have lost their edge,” which is basically what I said yesterday**, but which is only relevant here because the quote actually has the word ‘words’ in it. That is a stretch.

And while we are doing mental gymnastics to find some kind of a unifying premise in this entry, I now give some of you the gift of a shout out – YAY! To make it just that much better, I shout out to you using Hemingway’s words, be they appropriate or not.

How’s that for unifying!

* Let’s be absolutely clear about one thing: even though I’m giving, I am still receiving, so if you have something for me, you still have time to send it on!

**We said basically the same thing, but Ernest did it much more clearly and concisely. Good thing I let that goal fall by the wayside!

To the Sanchezes: “Every man’s life ends the same way. It is only the details of how he lived and how he died that distinguish one man from another.” I am sorry for your loss. Trixie lived a full, warm, well-loved life, and I know that you will always have many memories that distinguish her.

To chm chm, on getting published: “All my life I’ve looked at words as though I were seeing them for the first time.” May you see your words – in print!- anew many, many times! Congratulations!

To chm chm, on big changes, bold moves: “Courage is grace under pressure.” You amaze me.

To McAdams and Big Poppa: “All things truly wicked start from innocence.” That kid (kids?!) is going to be WICKED COOL! Also, he or she might be Wiccan… whatever! Congratulations!

To Denichiwa: “An intelligent man is sometimes forced to be drunk to spend time with his fools.”

To Bonnie, Jill, and my mom: “For a long time now, I have tried to write simply the best I can. Sometimes I have good luck and write better than I can.” Here’s to those days when something comes from you, and it makes you proud that it was in there.

To Hemingway himself: “His talent was as natural as the dust on a butterfly’s wings. At one time he understood it no more than the butterfly did…”

To Atticus Jones, my dog: “Did you just fart?” (I’m sure Hemingway said this at least once in his life. Go ahead – prove me wrong!)

Ernest Hemingway said many other brilliant things – duh! He was ERNEST HEMINGWAY! Here is one last quote that I love:

Nice one, right? Now go out there and find me a gift, would ya?