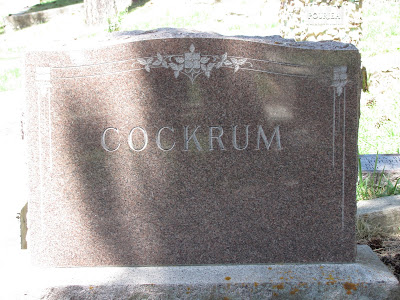 After writing that last post, I had a mighty strong hankerin’ to do two things: finish telling you about the trip I took last summer to the great state of South Dakota, and stand on the corner of a busy street and scream,with the joyful abandon of a drunken banshee, a certain word that will remain untyped in this post. Can you guess what it is? Go on…guess! Perhaps you could if you had something to lubricate your mind a bit, massage the old membrane, if you will… not that membrane and not that kind of massage, Ass Nasty! I’m speaking, of course, of a drink, a restorative beverage, a rum drink perhaps, a rum cocktail, a cockrum, a …uh-oh! I almost wrote it! I was so close! Must not write the word! Must be careful!

Anyway, I forgot where I left off in the tales of my travel and the saga of McAdams and her quest to avoid human contact and 50’s music. She doesn’t like people, generally, though she is fond of bears, and she is unreasonably afraid of any music that even approaches doo-wap, as she believes those smooth soul stylings are harbingers of doom. Other than these and a few other idiosyncrasies, she is the perfect traveling companion.
OK, so I told you about Mount Rushmore (boo!) and The Crazy Horse Memorial (yay!), Keystone and the shacklet, Porter Sculpture Park and the 1880’s train. That brings us, without further doodoo, to Deadwood! Yay! FINALLY! 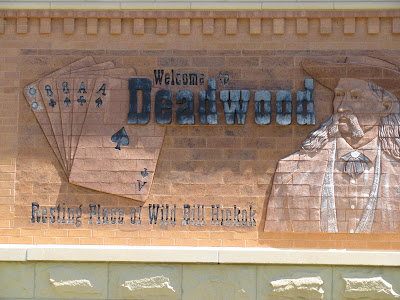 Like all things that get an unnecessarily long introduction, are much anticipated, and over-hyped, Deadwood itself was kind of a letdown. 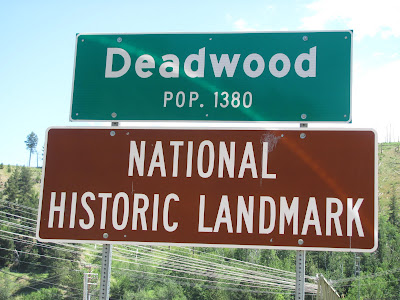 The historic part of Deadwood is mostly torn down, burned up, or remodeled, nowadays. The area was severely economically depressed until 1989 when gambling was legalized, and the gaming industry gave the city a much needed financial shot in the arm. Unfortunately, now Deadwood is filled with casinos that are dimly lit and tacky, like I imagine all of Reno to be. I don’t know why, I just do. The HBO series also did much to generate interest and tourism to the city, so there are a lot of cheesy souvenir stores and uninspired eateries, including one that is owned by Kevin Costner that is crammed with memorabilia from his movies. That was kind of weird. Deadwood is a little out of the way, because it was bypassed by I-90, and I found its sister city, Lead, to be more interesting and charming. Even the famous whorehouses are gone, the victims of a big raid in 1980. The last one to close was called “Pam’s Purple Door.” There’s some trivia for ya! After some industrious sleuthing, I did happen to spot a sinful roundheel strumpet plying her wares in front of a “slot house”… 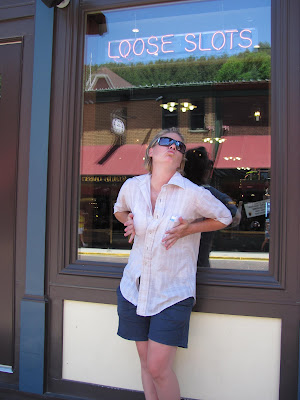 If modern Deadwood lacks a bit to be desired, its history is still fascinating, and we loved the tiny Adams Museum – no relation to Mc- which had artifacts like chairs, scissors, hardware, blankets and old, yellowing ledgers behind ropes or under glass.

Here is a brief account of the city of Deadwood:
Deadwood Gulch, as it was originally known, was so named because it had a bunch of dead trees in a gulch. (What exactly were you expecting?!) It was an illegal settlement, because due to the Treaty of Fort Laramie in 1868, it was part of the Black Hills territory ceded in perpetuity to the Lakota Sioux, and early on, the government sent troops to several forts to keep people from entering the Hills. 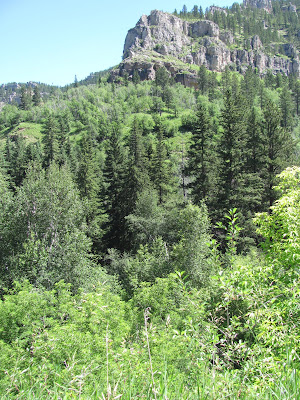 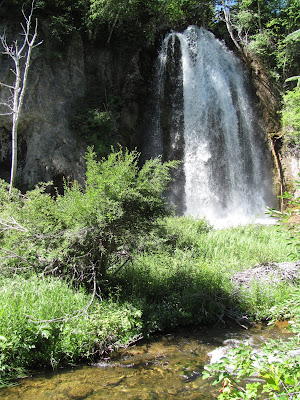 The Black Hills are magnificent and rich in minerals and resources, and settlers took notice and sneaked in to exploit them, despite the military presence. By 1873, the U.S. government began trying to buy the land back from the Sioux to open it for mining. In 1874, the coc – the conquered commander George Armstrong Custer was sent to investigate rumors of gold, which instigated the rush.
(A word here about Custer… I don’t like him. After barely graduating at the bottom of his class at Westpoint in 1861, he was known for not obeying rules and playing assholey practical jokes on his fellow soldiers – just the kind of guy you’d like to serve next to in a combat situation, right? He excelled in self-promotion, travelling with a 16 piece band, a small group of journalists, and dressing up in stupid costumes, like buckskins and boots. He wore his blonde, flowing hair down and loose, like an 1800’s Jim Morrison, and more than once his recklessness caused unnecessary danger to his troops. He was only made a general because of social promotion; his title was an honorarium from a high-ranking fan, and it was temporary. After the Civil War, his permanent rank was that of captain. He invented fancy-pants social events for his inner circle, which included young and dashing favored officers and his family members. This group was known as ‘the royal circle’ by resentful enlisted men.
He was sent to scout the Hills because he had already fought and won some battles against small bands of Sioux, when he was charged with protecting railroad interests. Prior to this, Custer had skirmished with the Cheyenne at the Battle of the Washita River, where he claimed to have killed 103 warriors. The Cheyenne estimated their own losses at 11 warriors and 19 women and children, plus Custer took 53 women and children prisoner, and shot most of their 500 plus ponies. Dick. Because he was arrogant, he assumed a quick and easy victory if he met up with the Sioux again.
Custer took about a thousand men into the Black Hills, and he took his time doing it. He hunted and shot a grizzly, hiked (but didn’t scale -wuss!) Mt. [Me So] Harney, played a lot of baseball, and threw nightly champagne parties for the winning teams.
By the time Custer and his men encountered the tribes, tensions between the Indians and the U.S. government were running high, on account of constant treaty-breaking and continuing American advancement on Indian landed. The government decided that all remaining free Plains Indians be rounded up and “corralled.” Instead of willingly reporting to designated areas, Sitting Bull gathered together the largest ever gathering of Cheyenne, Lakota, and Arapaho Indians at Little Big Horn River, to discuss what to do about the white devils that were destroying their way of life, stealing their land and murdering their people.
Custer had no idea what he was getting into. His famous last words were: “Hurrah, boys, we’ve got them! We’ll finish them up and then go home to our station!” WRONG!!!)
Right. So back to Deadwood. In 1875, a miner found gold in Deadwood Gulch, and it was on like Donkey Kong. In no time a-tall, the population of the still-on-the-DL town reached an estimated 5,000. In 1876, Charlie Utter and his brother Sam rode up in a covered wagon train filled with prostitutes and gamblers. That same year Wild Bill Hickok (Hickok-sucker?) was shot in the back of the head in the Number 10 Saloon, and shortly after that Calamity Jane began making up rumors that she had been romantically involved with the famous marksman, though by all accounts he was said to have found her somewhat repugnant. Al Swearengen (I admit, I just said it, LOUDLY, but I didn’t write it, so it doesn’t count!) opened up the Gem Variety Theater in 1877 and quickly cornered the opium trade. The Homestake Mine, the largest and most profitable in the area, thrived, and Sheriff Seth Bullock kept order, if not law, in town. 1878 saw the first telephone exchange in Deadwood. In 1879 a fire almost destroyed the town (this would happen three more times, the last being in the 1950’s), by 1880 there was a Chinatown, and in 1883 Deadwood was almost wiped out by a flood. In 1890, the railroad pushed through the Black Hills.
I know all of this stuff is true because I read two books, a bunch of pamphlets, and consulted the Internet.
The coolest part of Deadwood is Mt. Moriah, the cemetery, which was created between 1877 and 1878. You can see famous graves like these: 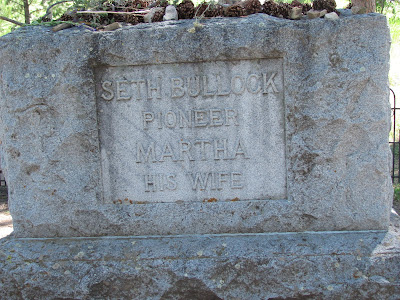 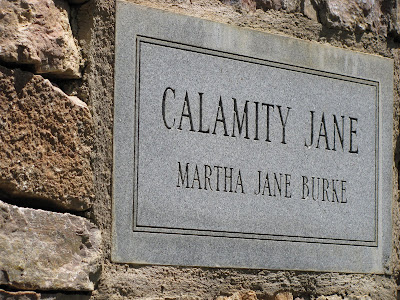 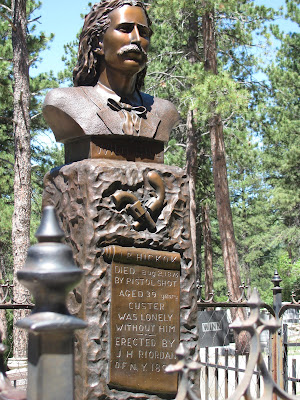 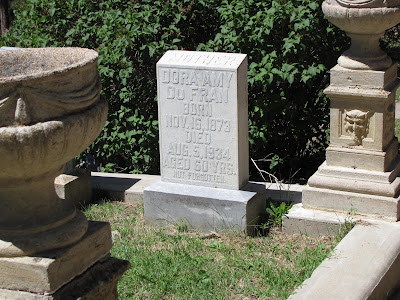 Ms. DuFran was the most profitable madam in Deadwood, and also had brothels in Belle Fourche and Rapid City. The one in Belle Fourche was called “Diddlin Dora’s” and was advertised as “Three D’s – Dining, Drinking and Dancing – A Place Where you Can Bring Your Mother!”, which is especially convenient if your mother is Elliot Spitzer, Jimmy Swaggart, or Hugh Grant. Calamity Jane worked for Dora DuFran as an occassional cook and maid, and it was from Diddlin’ Dora’s that Jane went off on her final bender. The little devil planter in the corner of the photo is one of four, that represent Dora’s four business establishments. Also buried at Mt. Moriah is Dora DuFran’s beloved husband and her pet parrot, Fred.

Mt. Moriah has a big section for children, many of whom died in epidemics, one headstone for an unidentified Chinese man, and a large Jewish section. 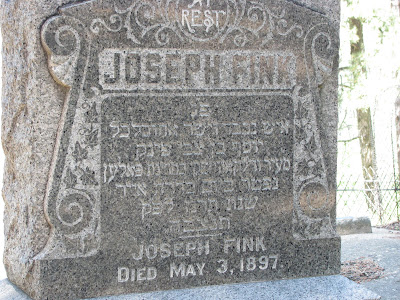 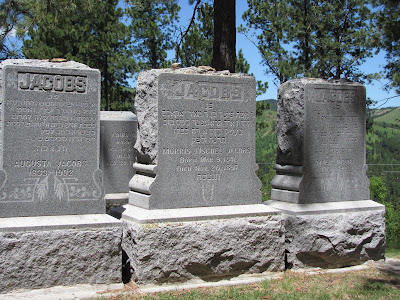 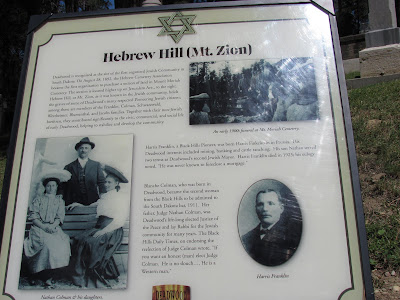 All right, my precious co- umm, concubines, that’s about it for Deadwood. My fingers are tired and my mind’s half worn from thinkin’, so I hope you’re satisfied, coc- Caucasians and other racial groups who read this blog. I’m out! Signing off from Deadwood,

Your COurageous Correspondent, Queen of the DaKotas…
So long for now, SUCKERS!!!!!!!!!!!