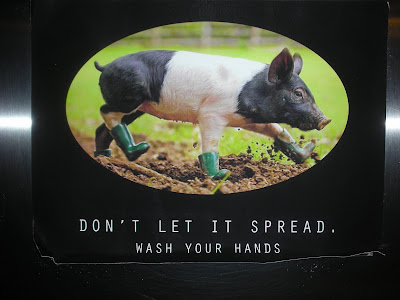 The Supreme Court recently clarified that freedom of speech, even if the subject, tone or intent of that speech is vile, incendiary, misguided or hurtful, is a sacrosanct and inalienable right in this country; for the time being, at least. Even though the Court found in favor of the vicious, hate-spewing, possibly inbred Phelps family that picket schools, funerals and public thoroughfares in the hopes of convincing the masses that we deserve the punitive fury of the Divine because we tolerate homosexuality*, I say, “Yay!” While I use that word often, it is one that is well-chosen, not just for its resounding affirmation, but also for its exuberance and joie de vivre. Even if your words are truly shitty, I think you should be able to speak them. I also believe there is a responsibility that comes with having a voice, and that you should think before you speak. Or type. Definitely before you text, especially if you’re drunk. Sometimes I forget that I believe this, and sometimes thinking is just too much effort, but I still want to talk or write, so I do it anyway, but this post isn’t about me, it’s about WORDS. Why don’t you just shut up, Imaginary Cyber-Conscience that’s always interrupting me? Always nagging, always whining! You’re not the boss of me! Shut it!

Like I was saying, words are potent. As Chief Justice John Roberts wrote in his ruling, “Speech is powerful. It can stir people to action, move them to tears of both joy and sorrow, and…inflict great pain.” In 1984, arguably the best book written in the history of ever, one of the cornerstones of mass control is the manipulation and restriction of words. This is a partial explanation of Newspeak, the language Orwell created in the book. Here Syme, who is working on the latest edition of the Newpeak dictionary, is speaking to Winston Smith, the protagonist of the story:

‘Don’t you see that the whole aim of Newspeak is to narrow the range of thought? In the end we shall make thoughtcrime literally impossible, because there will be no words in which to express it. Every concept that can ever be needed, will be expressed by exactly one word, with its meaning rigidly defined and all its subsidiary meanings rubbed out and forgotten. Already, in the Eleventh Edition, we’re not far from that point. But the process will still be continuing long after you and I are dead. Every year fewer and fewer words, and the range of consciousness always a little smaller. Even now, of course, there’s no reason or excuse for committing thoughtcrime. It’s merely a question of self-discipline, reality-control. But in the end there won’t be any need even for that. The Revolution will be complete when the language is perfect. Newspeak is Ingsoc and Ingsoc is Newspeak,’ he added with a sort of mystical satisfaction. ‘Has it ever occurred to you, Winston, that by the year 2050, at the very latest, not a single human being will be alive who could understand such a conversation as we are having now?’
Diabolically brilliant, non?
Self-expression is a gift we shouldn’t take for granted. Nate Fisher, the fictional character in Six Feet Under (played by Peter Krause, now Adam Braverman on Parenthood, if that means anything to you), said in one memorable episode that I have completely forgotten, “If there’s one thing about death I know it’s this: death will shut you up right quick, so if you have something to say in this world, just say it.” (I forgot the ep, but I wrote the quote down on a Kleenex that I’ve been carrying in my pocket ever since. I do that. I’m big on scraps and stickies.)
Of course, sometimes just saying it is easier said than done.
Henry B. Adams said: “No man means all he says, and yet very few say all they mean, for words are slippery and thought is viscous.” Robert Frost said “Half the world is composed of people who have something to say and can’t, and the other half who have nothing to say and keep on saying it.”
I was explaining the importance of choosing your words carefully to my 10 year old nephew, who I’ll call Eli in this blog. He was talking about how kids in his school use the “…B-word and the F-word and the C-word (I later found out that one was ‘crap’; who’d a thunk?) all the time,” and how there was profanity in the music that he likes, which includes Weezer, the Clash and Beck. He’s really cool.
I told him that those kids probably didn’t understand all the things the words could mean, and their connotations, and that if you were going to cuss, you should make sure that profanity was the best option for the situation. (I know what you are thinking here; something along the lines of “practice what you preach.” Shut yer piehole, Judgey! Nobody cares what you think and your mama’s ugly! Burn!)
Eli is profound, and has great depths of understanding.
“Yeah,” he concurred. “It’s gotta be at the right place at the right time. Like if you were in the bushes, takin’ a pee, and you really had to go, but then you got abducted, that would be a good time to let the F-word fly.”
Excellent speculation. That would probably be a fine time.
His sister, who is six, says “poop” a lot. Poop is a great word. Easy to say, easy to spell.
Here’s an interesting example of the use and interpretation of words: Really, are those the words you would associate with this guy? Actually, now that I look a little closer, he kinda has it going on…

Here is a brief poem I wrote a long time ago about words, kind of. It’s called:
SCRAPS

Curled at the edges

Shards of a life

Stuffed in a pocket

Read between the lines

In a piece of a place

A slip of a spark

On a scrap of paper

Well, oddly, I’m out of words right now. I didn’t feel like I had too much to say, but I didn’t want to deprive you of me for more than a week. That would be uncool.
P.S. to Mr. Roll ‘Em If You Got ‘Em Mario: You’re in adenial …so clever!