Forgive me Father, for I have sinned. It has been 21 days since my last confession, days which have been marked by an alarming dearth of transgression. What I’m trying to say is,  there ain’t been no glory this side of the hole.Just not too much going on. For awhile, I was productive as hell, but you know, you burn out on that. I did well on my new action plan for life, which I read on a bumper sticker and adopted as my own – “Say Yes More Often Than You Say No!” – but that fell by the wayside when I realized that I was saying yes to all kinds of things, and never actually doing them. Just as water always flows downstream, I always manage to find my inner lazy and pool up in it until I start to drown. Then I see a new bumper sticker and all is possible again, on account of I found a way and saw the light on the back of a Chevy Tahoe, and this time, things are really going to be different. 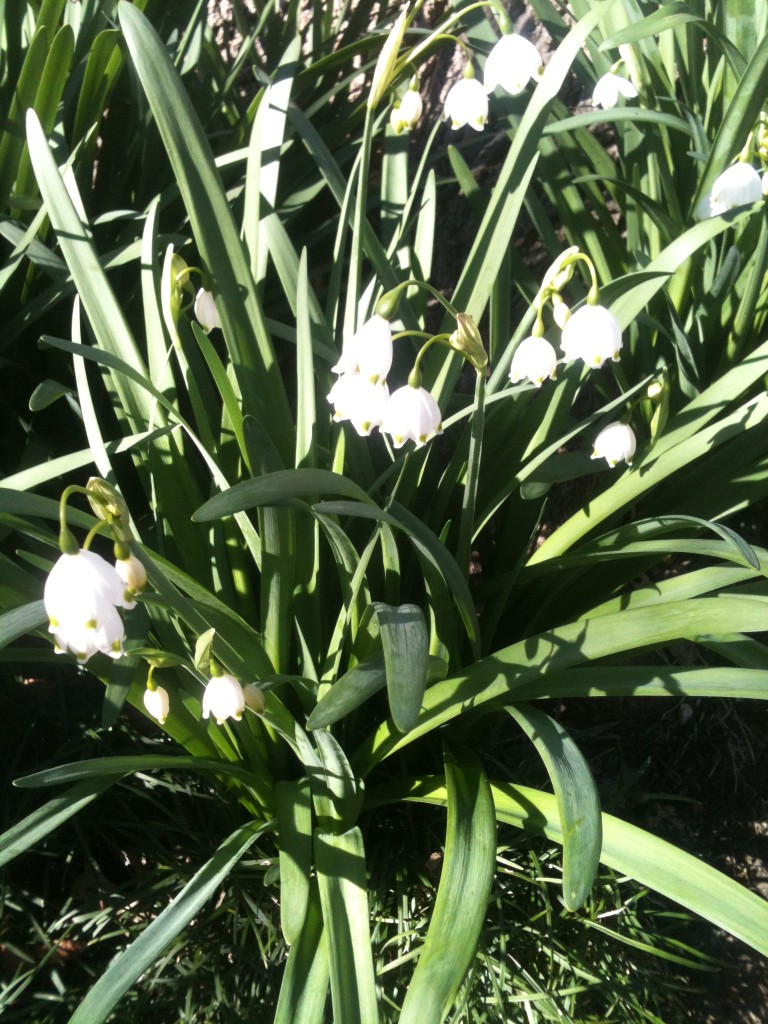 Despite the foot and a half of snow that dumped from a sky so gray it squeezed the sun like an overprotective mother at the beach shamelessly attacks a zit on the bent back of her skinny white nerd son, signs of Spring are showing themselves in my cozy country home off the highway. My mom told me that in France, the Lily of the Valley is the first flower that blooms after a cold winter, so it is a harbinger of the season of rebirth. Wikipedia told me that in Christian lore, the flower sprang up from Mary’s tears as she wept for her son on the cross. Personally, I like the spring thing better, but there is a connection to Christ’s second coming and the plant; indeed, it appears that the sweet little lily has a strange effect on all men, Savior or not. It seems that an aromatic chemical in the lily, the bourgonal, used commonly in perfumes, causes human sperm to swim super fast, and even acts as a sort of spermatazoan GPS down the Fallopian Tube Highway to the Ovum Exit. It is the only scent known to science that males have a greater sensitivity to than females. I knew that men were not more sensitive to the odiferous agent in their own farts, but this is a revelation! Second coming, men? Sniff this why don’tcha? That’ll put an early spring in your step! Look at them sperm FLY! Oh yeah, one other thing: Lillies of the Valley are highly toxic, so ladies, no matter how desperate you may be to become impregnated, please don’t try to grow them in your hoo-hoo. That would be wrong in so many ways that I can’t believe you even thought of it.

Speaking of women who are desperate to be impregnated, my neighbor isn’t one of them, on account of she is due to give birth any day now. The baby is going to be named Peri. A long time ago, I was writing a novel, and it had a main character named Peri. She was a teacher. I like to stretch my imagination with my characters. Here is a chapter from that great American masterpiece, which has the working title Another Thing I Will Never Finish, or Adventures of a MiIe Wide and an Inch Deep:

DIRECTIONS –  Choose a character who has a meaningful name from one of the stories we have read.  Explain the name, its relevance, symbolism, appropriateness, and how it is used effectively in the story.  Pay special attention to rhetorical and sound devices, such as alliteration, assonance, consonance, rhyme, irony, oxymoron, pun, connotation, nuance and allusion. Example:

Long ago, before I was me

My father lived beneath the dark black sea.

The water was deep, but had no soul

For hours Daddy stared out the porthole.

On a submarine that smelled of men

Oil and iron and ammunition

Papa stared and wondered when

He would ever see the sun again

And the water would crush as sure as bricks

And the darkness would play all kinds of tricks

And the only sounds that filled his ears

Were radar beeps and the pulse of his fear

So he waited his time and wandered the deck

And longed for a breeze, a wind on his neck

The taste of a peach, or the brush of a kiss

The thrill of a peek, the coming of bliss.

He got off that ship as fast as he could

Moved back into the old neighborhood

He married a girl, the very first one

And traded the sea, once and for all, for a son.

That little child turned out to be me.

He named me after what gave him the most hope

He named me after the Periscope.

Hmm. It’s official. I am reduced to making myself the star of my own writing assignment. Pathetic. I wanted to write about the movie I saw last night, “Elephant”, but I wore myself out worrying if ‘ammunition’ is a close enough rhyme to ‘men’, and I still have to do laundry and wash my hair. And put off grading  the Animal Farm essays  again.  Stupid essays.  Going to eat sushi tomorrow night with Lia. Maybe after that I’ll grade. Or watch Letterman. Is it Winter Break yet?

I know this Peri is exactly what her mother and father want, and I wish her a lifetime full of hope and possibility.

BONUS: Read The Tenth of December by George Saunders. It is fantastic. That is your assignment. Next time, there will be a quiz. But don’t expect me to grade it. I simply don’t have the time.

3 thoughts on “Pictures of Lily and a Confession”