In the history of humanity, there have been countless examples of brave people, some trained for combat,some ordinary citizens of all ages, genders and ethnicities, who unflinchingly face formidable enemies who threaten life or liberty. I am reminded of this as The United States remembers the 71st anniversary of Pearl Harbor, an attack which saw Americans of all stripes rushing to protect our borders from enemy invasion.

Well, folks, it’s happening again. We, the people of Earth, are being attacked from an enemy invader, one that is smart and creative, that shoots low under the radar, a species so tricky it has lived in our midst, according to fossil records, for at least 30 million years, all the while gaining our trust, keeping quiet, staying out of our way – but, plotting, always scheming, dreaming of that day when they will rise en masse from the murk and the mire, the silt and the slime, to establish themselves as the genius genus that has outlived, out-adapted, outfoxed all others – are you frightened? Be afraid! For far too long we have ignored them, despite increasingly horrific signs, and it is time, people, TIME, I tell you, to make a stand against the fearsome catfish!

I have warned you repeatedly about fish in general, but do you listen? NO! Not even after I posted a really long video of the finned foe walking casually down an urban street in Anytown, USA. That’s right! You can read! I said walking! They were just a’strolling past the homes of your grandparents, your children, your beloved high school teachers, and what did we as a nation do to stop their little Catfish Pride parade – nothing! You didn’t even watch the video I posted, did you? 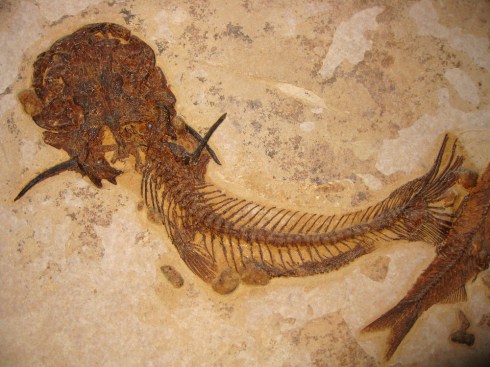 Catfish fossils have even been found in Antartica. This picture comes from a blog that has lots of catfish lore. https://ferrebeekeeper.wordpress.com/?s=catfish. Great info, but you just prefer to remain ignorant, right? Oh, Humanity! Will you never learn?

“Catfish?” you ask, mildly. “They don’t hurt anybody! They are our delicious little friends! Why you wanna talk bad ’bout the kittens of the sea?”

You are, of course, a fool. Some catfish are poisonous, and their venom can be fatal.Here are a bunch of striped eel catfish, probably attacking something lovely, like a seahorse or a starfish. 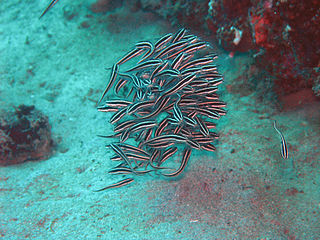 These guys are small and cute, but in asshole infiltraitors (did ya dig my double entendre spelling?!), size doesn’t matter. The small Candiru are said to be parasitic, and have been found in women’s vaginas, where their spiky spines penetrate the walls. They have been rumored to swim into the urethra in a man’s penis, up his pee stream, even though they can be up to six inches long – Ouch! Got your attention now, don’t I?! Once up in there, they feed off the victim’s blood, leaving bullet sized holes, and from thence they continue on; Animal Planet reports that human corpses have been found in the Amazon filled with fat, insatiable Candiru.  http://animal.discovery.com/fish/river-monsters/candiru-catfish/

They contrast nicely with the Mekong Giant Catfish, which can reach 650 pounds. These guys are just big ol’ toothless herbivores, and they are critically endangered, so I feel a little better about them. I’m keeping my eye on them, though, because here’s the thing: Catfish are amazing. They are an incredibly diverse species; one out of twenty vertebrate species is some type of catfish, I shit you not. Many have poor vision, but Lordy Lou, how they have developed all the other senses.

Catfish can smell certain compounds at one part per 10 billion parts of water. They can taste with their entire body; that’s right, their whole bodies are covered with taste buds. They are like swimming tongues.They have eight barbels, or whiskers, for “hearing”. They also have additional hearing apparatus, but the whiskers sense vibrations travelling through the water. Because of a bunch of super powers that I didn’t really understand, but which the intrepid catfish researcher will come across if she delves further than the Wiki-entry, the catfish can hear higher and lower frequencies than most fish, so much so that they can use their straight up and down whiskers to hear people walking on the shore line – O-M-G!!! They can even detect seismic activity, so that when the Apocalypse comes, who do you think is going to be the first species to take advantage? There will be all kinds of catfish raping, looting and pillaging! They have electroreceptivity, pressure sensitivity, fringed testicles (ooh, fancy!), the ability to growl menacingly, telekinesis, good credit ratings and advanced degrees in weapon-making. They are, in short, unstoppable.

But stop them we must! This time they have gone too far! According to a story I heard on PRI’s show The World, catfish who live in the Tarn River in Southwestern France have taken to attacking and eating pigeons on a small island in the river. This in and of itself is not so bad; pigeons are our enemies also, and are disgusting. The thing that makes this story such a nightmare is the way the sly catfish has adapted to its surroundings. First off, catfish are nocturnal and pigeons are, um, dayturnal, so the wily catfish has altered its internal clock to catch the pigeons unaware. They hurl themselves up out of the water, with 80% of their bodies on land to catch the birds and pull them under to eat them (with some nice Chainti and fava beans, usually). This is especially impressive when you consider that, being bottom feeders, catfish are naturally negatively buoyant, which means that they sink, rather than float, due to their gas bladders (gross!) and their big-ass bony heads. Imagine the force, or tork, or springload, or whatever you call it, that they have to use to get so much of their body up and out of the water! Incredible! They are huge; they range from 3-5 feet. That’s a catfish as big as me, people! In fist to fin combat, I really don’t know who would win! But here’s the most terrifying thing of all; the catfish were introduced to the area by idiot fisherfolk in the 1980’s. That means it has only taken them 20 odd years to adapt and dominate in a new environment.

Yikes! Now is the time for all good men and women to come to the aid of their global community! We must fight these clever aquatic – or should I say “amphibious” – terrorists! As Winston Churchill once said, “There is nothing to fear but fear itself.” That doesn’t mean you should dismiss fear as being no big deal; nay, just the opposite! Fear is the root of terror, horror, angst, trepidation, foreboding, panic, and consternation! I’m scared people, and I WANT YOU, to do something about it right away! Now arm yourselves and get out there! The free world depends on you! 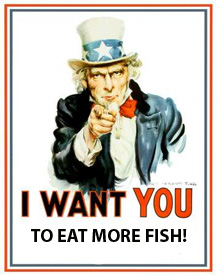 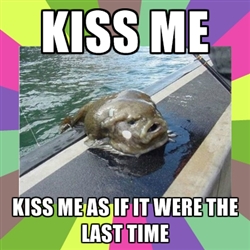 Don’t really kiss him. He will eat your face off. Bastard.