I remember when the policeman changed from being my friend to being the enemy. He used to be the patient face that looked down from under the visored hat and offered his hand, strong and capable, when I told him I was lost at the mall. Ne became someone to be feared and avoided, eyes straight, head down, no contact; he became the enemy when I started getting high. I was quick to judge when I felt I was being quickly judged. Later I learned about cops who were bought, who were sadists, who put people down to make themselves feel strong and powerful, who coerced, abused, misused, lied, profiled and killed.

Now when someone mentions the po-po, I expect a story about fear and intimidation.

And I remember watching a Late, Late Show movie about a crazy preacher with tattoos on his knuckles, chasing two wide-eyed children through a black and white nightmare under a huge luminous moon in a cloudless night. The moon looked like God, and watched, blankfaced, lighting the way for both victim and stalker, lions and lambs, while the preacher, evil incarnate, pressed on, relentless. Up way past bedtime, hugging my knees, terrified by the images flickering from the tiny box of a tv on the table, it occurred to me fro the first time that priests(or rabbis, imams, etc.) could be bad, caught up in the human battle of love and hate, called to the higher powers of greed, desire, ambition and psychosis instead of salvation, redemption, service and peace. I had never before imagined that those who were supposed to be good could be horribly, maniacally evil, and that the worst kind of monster could be human, even those who consider themselves to be holy. Later in life, evil preachers escaped the box on the table and exploded in the headlines, dirty sneaking fingers snaking into innocents, poisoning their futures and creating black and white memories to keep the victims forever children, being hunted down mercilessly while others watch impervious and still as the moon in a cloudless, endless night.

Now whenever someone speaks about a religious leader, I usually think of Jim Jones, or Ted Haggard, or some out-of-touch cardinal who actually believes he is doing anyone a favor by transferring some disgusting pervert from one parish to another instead of seeing that he rots in jail in this life and Hell in the next.

I know when the good guys of my youth, the regular Joes and stand-up-fellas, became those from which I had to protect myself: bankers, politicians, people who knock on the door, people asking if I can spare a dime, doctors, lawyers – they all fell from grace, went from ‘buddy’ to ‘bastard’.

Now, nationally, teachers are becoming the enemy. They are vilified, mistrusted, and demonized.

I think one would be hard pressed to find those who do not consider the public school system broken.  Our schools are mismanaged, ineffective and are, often, educationally stifling. The problems that beset them are large, unwieldy, multi-faceted, complex, and deeply ingrained.

Because of all this, it is difficult to imagine that the root cause of these myriad problems lies solely in bad teachers. Of course, there are bad teachers. You have sat, or slept in, or skipped their classes. We all have. But there are so many more good teachers than bad, and there are so many things to teach other than standardized test matter. At my school, we spend more time teaching students how to take the test than we do the actual test content. Their overall scores are much more important to our school than comprehension, the ability to apply information, or the desire to think about information abstractly, in order to problem-solve, evaluate, or form new ideas based on prior knowledge.

On the last day of school, my principal told me that because my students’ test scores were low, it would not be fair to “jeopardize their futures” by allowing me to teach them. My students are just learning English. Some of them have only been in this country for a year and a half, none of them more than three years, and only a quarter of them passed the test that is given to native speakers in the 10th grade. I believe the reason they didn’t perform as well as students who have been in the country for five or more years, (five years is the average time it takes for a learner to achieve fluency in a new language), or since birth, is because they simply don’t have enough English yet. After three years, I doubt I could pass a high school test designed for native speakers in Spanish, German, Japanese or Urdu. Could you? Instead of looking at the sum of my career in order to determine my efficacy as a teacher, I was judged by others’ performances on one test, taken one time.  I guess I feel the need to explain, but this is not my point. This is what is happening to teachers around the country. The public seems to believe that if we are able to fire low performing teachers – like me- we will have schools that are suited to all students’ needs, where everyone can achieve in the same way, where failure is not an option and everyone is gifted and talented. We will close all achievement gaps and the underlying problems that lead to these gaps – poverty, homelessness, a lack of parental or family guidance and support, drug addiction, cognitive capacity, hopelessness, a history of under-education, special needs, behavioral issues, a lack of basic skills, apathy, malnutrition, the need to work to support one’s self or family, teen pregnancy- these things will disappear if we are diligent in weeding out the bad apples that make up our educational core. We know where the blame should fall. Teachers are the new enemy.

I wonder what people think about when they hear about teachers. That we are stupid, lazy, greedy, apathetic? Some of us are unintelligent, rigid, tired, and arrogant. Some are bullies, assholes, pedophiles, megalomaniacs, and alcoholics. It’s true.

It’s easy to forget that while there are corrupt, despicable cops, there are also those who will help you fix your tire on the highway, search your house when you think there is a burglar in it, or hold your hand, get you a milkshake, and wait with you until your mom comes to get you when you are lost. There are religious leaders who believe in mercy and generosity, who are happy when they can lighten someone else’s load, who give the best advice that they can, who comfort the dying, and who cry when they cannot find the answers. And there are teachers who want to teach about literature and the language of numbers, about ideas and love and respect and questioning, about who you can be, and imagination and science, and finding ways to be happy, productive, engaged and fulfilled.

When we are afraid, we blame. It makes us feel better to be able to have a culprit, someone we can hang high from the rafters, and when he is gone, so is the threat and the danger. It makes us feel better to know that at least we are trying to do something. Too often we jump at the quick fix, the easy answer, and by doing so, we bury the real problems and don’t fix anything.

Dividing whole groups of people into one thing or another – us or them, friend or foe – makes us paranoid and weak. It’s also the first thing fascists do on the road to genocide.

So, I guess this all boils down to “don’t throw the baby out with the bathwater,” plus a healthy dose of “judge not lest ye be judged.”

Sorry you had to read all of that just to get to a summary of cliches. I feel better though! Maybe I should turn off the computer, get off the couch and go for a walk.

That’s something to consider. 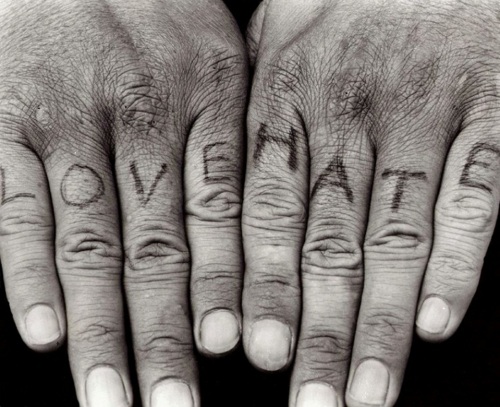