I have no life these days, because I have a dog. Said dog is very fluffy and often quite adorable. However, fluff and adorability are often thin facades thrown up to hide an uncanny knack for a dark kind of sneakiness. I know this for a fact, because the cuter and fluffier I am, the more likely I am secretly scheming and plotting. I can’t help it. It’s my nature, and apparently it is a trait that has seeped out of me and been absorbed, osmosis-style, by my innocent little puppy. Or maybe he was just born a dickhead. It’s hard to tell. 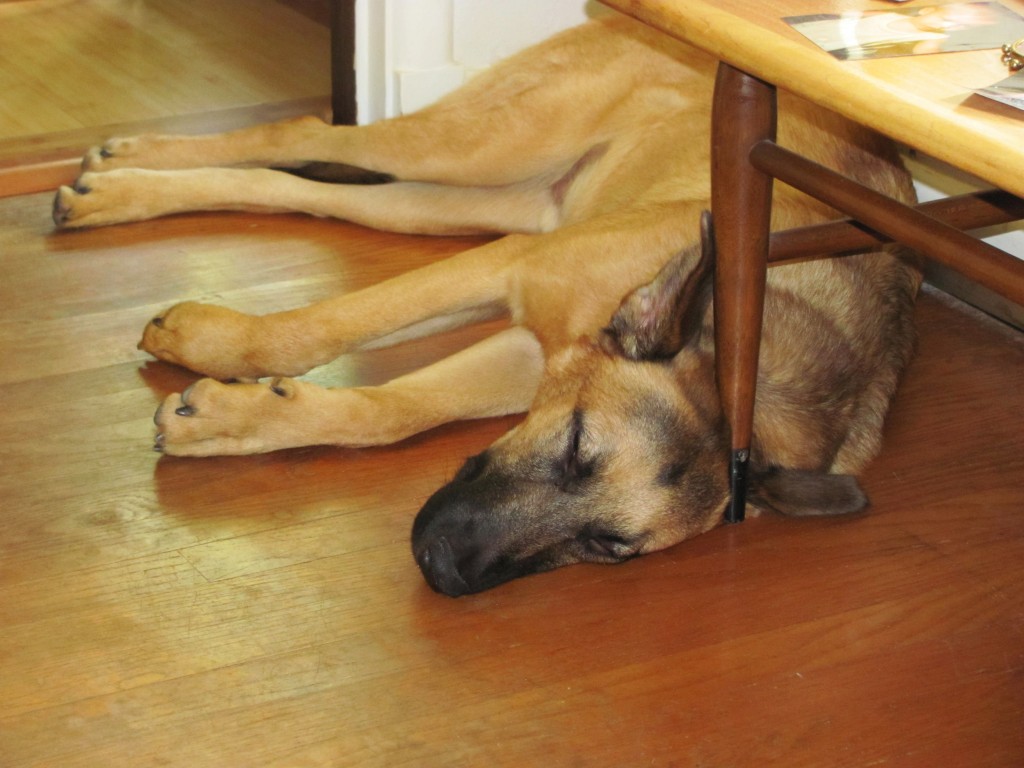 He is very energetic. Too energetic, really. When I tell people this, they always say, “Aww! He just a puppy! That’s the puppy in him! That’s just how puppies are!”

I think he snorts cocaine. I don’t know where he gets it or how he pays for it, but several times his wet, black nose has had some unidentified substance off, and he won’t sit still for me to wipe it off with a Kleenex. I told you he was sneaky.

He does other bad things. He ate his bed. He ate a bag of charcoal. He ate two computer cords. He ate something’s poop in the alley one day. That’s bad and disgusting. And it doesn’t matter what it is that he ate, he still thinks he can come breathe in your face whenever he wants, even if you are sleeping. He’s like that. Insensitive.

I guess I could deal with that sort of self-centered compulsion toward self-gratification (he does that, too, but hey, who doesn’t?), but now I think the drugs are influencing him to try all kinds of dangerous things, illegal things.

He broke into a backyard pool. There were fences up and everything,  but he just felt like taking a dip. 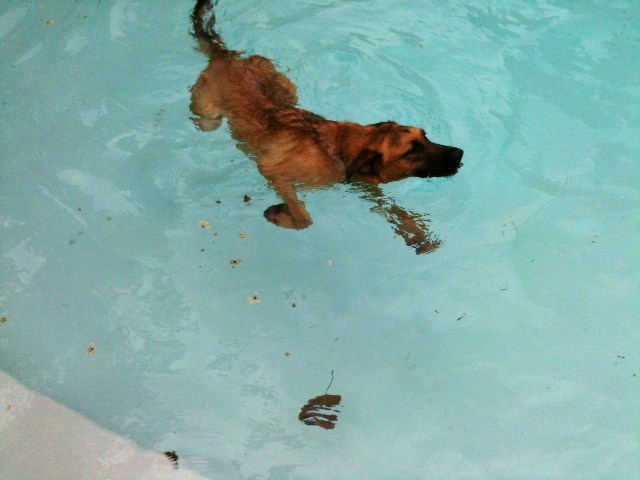 I could see his tail wagging while he swam. I told him to GET OUT RIGHT THIS SECOND BEFORE SOMEONE COMES HOME AND CATCHES YOU IN THE POOL, but he didn’t. He just looked at me and laughed so hard he almost drowned. Would have served him right.

He’s started tagging. I explained to him that while many consider grafitti to be a valid form of self-expression, if he got caught, he could do time, real time, the kind that would make his days at the pound seem like doggie daycare. The next day, he posted this on his blog: 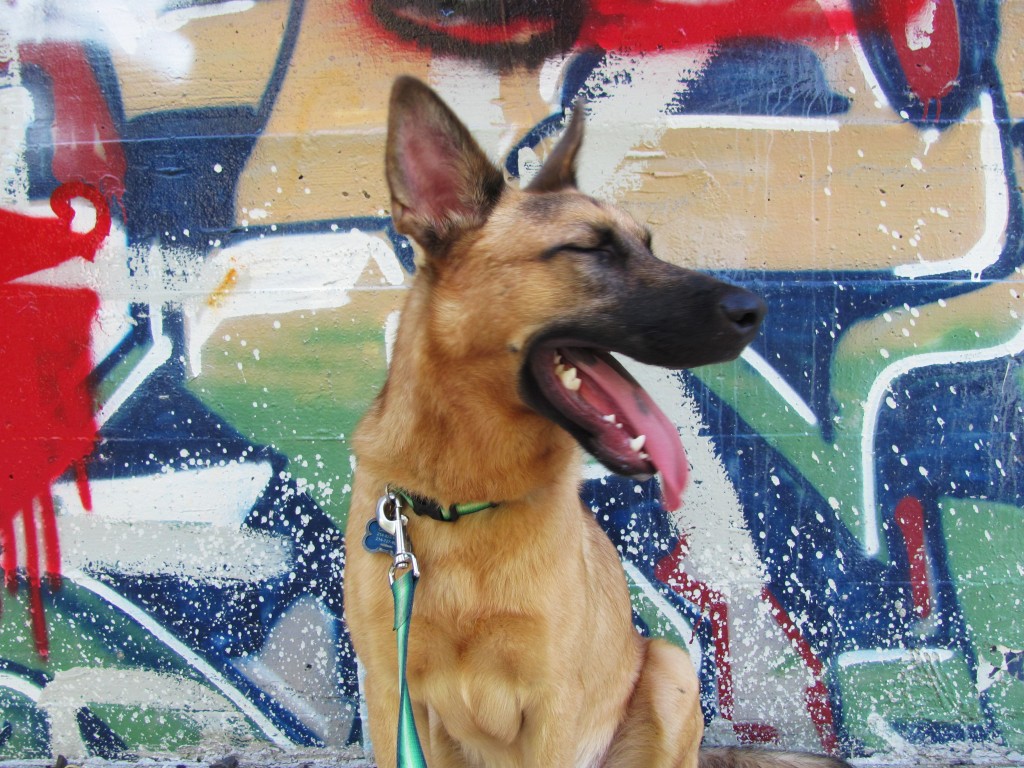 He thinks if he shuts his eyes, nobody will be able to figure out his true identity.

He has no shame. I swear, that dog has balls! Well, phantom balls, anyway.

I worry about him.

Here is a piece of a story I am writing about our adventures. The names (and in some cases, the genders) of the guilty have been changed.

You can read it, but don’t steal it. Seriously, don’t.

Claire says: People just love Harmony. Everywhere we go, they stop to pet her, or to tell me how sweet and pretty she is. I don’t know why exactly. I think people are attracted to her because she seems so carefree and eager. It’s funny, because the first time I saw her, I thought she looked kind of scary.

One day walking home, cranky and draggy, we had to wait on an old lady backing out of her driveway. She had a big old Lincoln, and she inched her way down the drive, all careful stops and starts like old ladies do. I was sweaty and sleepy and ready to get home and take a shower and a nap. When she finally got on the street, I nodded at her, but I didn’t smile. Instead of driving past, she pulls up right next to us and rolls down the window. She’s all made up, crimped, coiffed and curled, wearing a three piece polyester pant suit with the jacket on, even though it’s already a thousand degrees out. She has a vest and wears a jaunty little scarf knotted loosely at her throat, for Chrissakes! Her lipstick matches her fingernails, which match her purse. Her hair is a lilac helmet that flips up on either edge, a  J of hair on one side of her little, puckered peach face, reverse J on the other. She was pure-D styling, circa 1972.

“Wonderful, wonderful!”  Her head shakes a little, and her voice is creaky, a gate longing for oil. She reminds me of a cross between Katherine Hepburn and Liza Minelli, and she’s smiling so wide with her orange lipstick mouth that it looks like her face is going to crack in a million pieces, like a puzzle. “Wonderful dog, there!” she cackles. It sounds like “wan-dah- fuh dawg, they-uh!”  She throws her bobble head back on her wrinkled skinny neck and laughs, HAHA!  Then she rolls up her window and drives off, just like that! It was completely weird, as if she was a southern belle Technicolor movie star, shrunken and shriveled and wrapped in a polka-dotted polyester shroud, come to the future to tell me the dog was wonderful. She looked happy crazy to tell me. Sheer joy. You don’t see that too often, really.

Her little outburst seemed so strange, almost surreal, because nobody in my world could be that happy about a dog. Maybe her grip had slipped, and she was remembering some dog she once knew, a long-dead Lucky or Princess. Who knows who Harmony was in her world? Sort of sad. But even sadder still: whose world would I rather live in; mine where I look forward to sleeping through the day, or hers, where seeing a dog in the street is a moment worth celebrating with a stranger?

I really like the official video of this song (2010). It’s weird and cool, but I really hate the VEVO, so I’m posting this one instead. Still good!

Hey, Big John! What did you do? http://www.livescience.com/15346-texas-lake-blood-red.html Cut that shit out!