So, the little dog’s name is Atticus, after a true hero, Atticus Finch. If he was one-dimensional, he’d be flatticus. After he returns from his walk, he has shatticus. If he was feline, he’d be kitty catticus. (I recently tried this terrific comic patter out on a good friend, as kind of a hilarity preview. When I get to this point- the “golden arch”, as I call it- she said, and I’m quoting here, “I don’t have to listen to this shit.”  This proves to me that she doesn’t get the sophistication of my humor, and that I just might be – dare I say it?-the Lenny Bruce or Mitch Hedberg of my generation. The great ones are always misunderstood.)

I like Atticus now, but for awhile, I was  NOT into him. See, he can be a real asshole. Sometimes, just for fun, he’ll gnaw on my skull when I bend down to tie my shoe, which I have to do all the time, because he demands about 40 walks a day. he wants me to get up with the sun to go for a wee promenade, and he whines if he doesn’t get his way. Perhaps you will recall that I do NOT like to be told what to do. He doesn’t care. He’s seven months old, but he acts like he’s only five months, like a stupid dog baby. He shits wherever he wants and acts like he can’t clean it up, and when I stick my hand into a sweaty little plastic bag to scoop it, you know, to be cool, I notice, as I clutch a squishy, steaming, repulsive mound of doo that he has chewed holes into the plastic. What a dick! I swear I can hear him laughing. Also when we walk, he tries to rip my arm out of its socket and drag me down the street like a queen ( I had a little trouble of thinking of an appropriate comparison of something you drag.) Especially if we see a squirrel or a cat. Or a bird. Or sometimes a flower. When I don’t let him pull me, he bites the leash, head butts me, or works a tooth into the bottom of one of his plastic poop bags. As I alluded to before (see ‘sweaty, steaming, squishy mound of filthy poop in a plastic wrapper that works like a shit strainer’ reference above.) Uncool! Why would anyone do that?

Because of him, I am way behind on my TV. I’m way behind on everything. I can’t read, can’t write, can’t grade any papers…the dog is going to get me fired. Worse still, Atticus has exhibited signs of cruelty to my other pets, Junior, Duckless MacArthur and the twins. 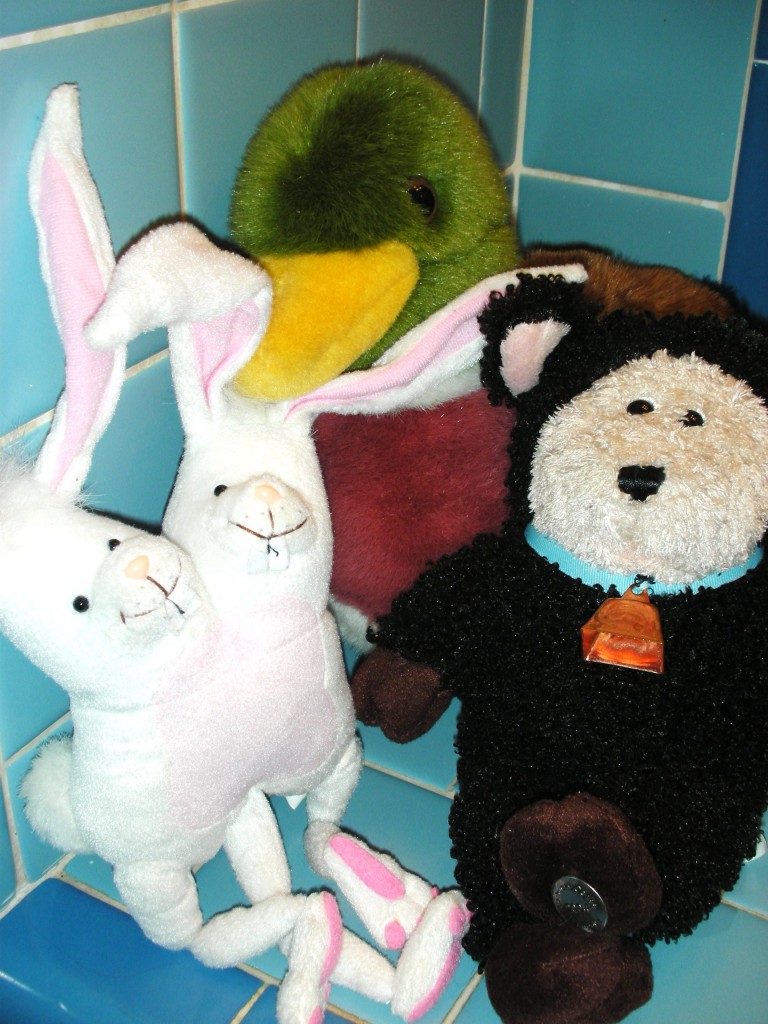 See if you can guess who is who. This is an odd turn of events, because these poor stuffed angels have been victimized before. I had an ex-boyfriend who would also torture them, sometimes in a rather obscene psycho-sexual, sociopathic manner. These sweet stuffed pals ask for nothing, and are the absolute least deserving of such abuse. Still, just because Duckless is hot, he is treated like a plaything. Junior is just the sweetest little corporate bear you have ever laid eyes on (he was born in a Starbucks factory; is that his fault?) but he’s not the sharpest knife in the drawer, bless his heart, and everyone becomes wicked Uncle Ernie as soon as they see him. I don’t know why. Starbucks skimped on his little pillow brain, and he has had to pay for it over and over again. The twins are special. Just because they look a little unusual, people hate. (Unless you are a direct descendant of the original Siamese twins, Cheng and Eng; then they look pretty common, right? It’s all in the perspective, baby!)  Different is beautiful and conjoined is sublime! Attticus tried to separate them at the carotid artery, and he attempted to bury Junior alive under the prickly holly bushes outside. He wanted to mount the duck, repeatedly, which is the same reaction the ex-boyfriend had to the this fowl tempter. I am disappointed to report that this behavior was NOT the reason the relationship with said ex-paramour was terminated, but I kid you not, from now on, fellating  a stuffed animal is going to be a deal breaker, and I simply will not tolerate it.

So yeah, Atticus has his faults. He isn’t the hero I thought he’d be, though he does hold his urine all night long, which requires a heroic effort of which I personally am no longer capable. He has a ways to go before he saves Tommy from falling down the well. But he’s cute. He trots like a little lamb, if sheep trot. People stop me on the street to ask about him. 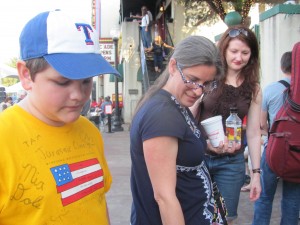 Note the looks of enchantment on their faces. He’s especially cute when he sleeps: 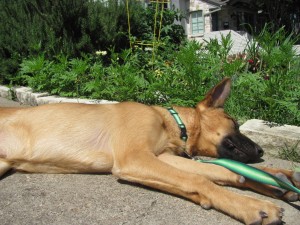 I had to give him a quaalude to get this shot. Kids, do you remember ‘ludes?

Anyhoo, now I love him. He makes me sit quietly and watch the night while he digs up the radishes in my garden. He’s so happy in the morning when I finally wake up. We walk for miles and meet new people and new dogs. I know he’ll be there when I get home. He follows me all around the house and eats the crotches out of my panties. He loves my niece, and she loves him, and he is allowed to go to Friday night dinner with my family, a very high honor indeed.

We are mourning the passing of Milo

Sweet prince of a cat with a dreamer’s face

and miss the unique trombone voice he used to express himself

We shall not forget you

Rest in peace, Milo Butters. We loved you.