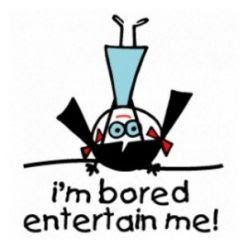 Urrgh. I’ve been sick, and not just allergy sick; I’m talking can-I-make-it-to-the-bathroom sick. I hear it’s going around, which only adds to a raging case of misanthropy I’ve been cultivating. Stupid people with their breath and fluids. One of those disease spreaders recently said that at least I was lucky enough to be on vacation when the dreaded stomach virus hit. It’s a well-intentioned comment I know, but really people, THINK! Who wants to be sick on vacation! I would gladly miss school to lay on the couch all day watching bad tv than waste a day of vacation laying around on the couch watching bad tv.

Which, as it turns out, is all I have been doing for the past two days. While I am beginning to feel better in my tum-tum, the low-level, chronic hatred of human-kind that I suffer from is getting much, much worse. I watched the Ladies of The View (Oh, so shrill! Please, ladies, let the stupid-ass guest finish answering the stupid-ass question you just asked!) Maury Povich, Dr. Oz, Regis and Kelly, and Rachael Ray. Twice I woke up to the Today Show; not the part that has the news, but the part that has crazy, drunken Kathie Lee Gifford (“Welcome to the Today Show! It’s Booze Tuesday! It’s Wine Wednesday!”) I also checked out Sesame Street; it’s different from back in the day, but still good. I especially enjoyed a riveting segment on “Things that Open and Close,” hosted by Elmo.
All parodies of daytime tv are true. It is inane, ridiculous, and actually destroys brain cells and independent thought. I know things now that are clogging my brain like a shellacking, a phrase I swear I hear every time I turn on any Fox station. I feel my synapses shattering, and those are some hard bridges to rebuild, I tell you what. Here are some things I have learned:
1. Erica Kane is still alive. She’s still a pretty crappy actress, and still looks exactly the same as she has for the last 30 years. Now there’s a shellacking for ya!
2. That guy who plays the Spanish teacher on Community and the crazy gangster guy in The Hangover is really a doctor. An MD. Really. Go figure.
3. Men are dicks and women are bitches. (I learned this on Maury. Hard to believe that show ever went off the air, huh? It was always so healing and uplifting…)
4. Some girl on a teenage mother show on MTV beat the crap out of her big, dough boy baby daddy on an episode and then got arrested for it.
5. Justin Bieber’s girlfriend, who is two years older than he is – scandal!- and who is also apparently some kind of star, is no longer wearing her Promise ring, so that means they are doing it!
6. The first manned untethered hot air balloon ride covered 5.5 miles over Paris, France. (Jeopardy is not always as interesting as I remembered it.)
7. There is a big bed bug infestation, it’s cold in the winter, and placebos can be effective. (I filed these in an ever-growing mind folder labelled “Things in the News I Thought Everyone Already Knew, But are Reported as if they had Just Been Discovered.”)
8. “Blue carpet is killing me.” This is from Nate Berkus. I am not sure who Nate Berkus is, but he has a show.
9. I am smarter than a 5th grader. Mostly.
10. Cable is 20,000 channels of crap.
I hope I feel better soon.
P.S. I would be remiss if I didn’t mention two really good things that happened during “mah layin‘-in spell”: My friend sent me a FABULOUS New Year’s present that was left on my front step in fancy-pants gift bag, which I found when, huddled up in my flannel pj’s, robe, sweater and bedspread, I went outside to dump the water out of a big bucket I had just rinsed. I LOVE gifties, and there is nothing better than a happy surprise! Thank you, E.D.!
Also, my mom made me delicious soup and then came out, in the cold and rain to deliver it. When she got here she called me a “Poor Baby!” about thirty times and told me I was being brave.
Even when I am sick, I remain the Luckiest Girl In the World! Yay, me!