Skip to primary content
Tonight I went with some friends to see a movie and have a bite to eat. An elderly man sat next to me in the theater, and I settled into the movie, which I liked. It was about the seduction of a gawky, bookish 15 year old boy by an illiterate, possibly semi-retarded ex-Nazi prison guard in her late 30’s. During the seduction sequences, I couldn’t help thinking thoughts that were, well, inappropriate, being that the boy was pre-pubescent and all. However, I have always been a sucker for eager fumbling and an unflagging willingness to learn, so who am I to deny my nature? Anyway, after the movie, the gentleman to my right asked if I had enjoyed it. We got to talking about the film and I found him interesting, so I asked if he wanted to join me and my friends for dinner. He seemed happy to, and I felt glad that we had met him and been able to invite him.
By the end of the night, I had given my phone number to an 80 year old racist from New York City by way of LA, who, after finding out that I teach in a predominantly Hispanic high school, told me that the reason Mexicans are unable to assimilate in the U.S., nor add anything of value to American culture, is because “they have lazy minds.”
Yeah, I still got it goin’ on! Dudes DIG me! I think our song will be “Old Man Gristle”, an adaptation I’m working on from the famous musical “Showboat”. More on this love connection as it develops. 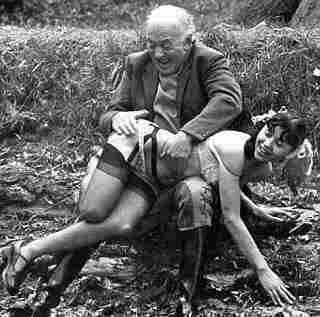 2 thoughts on “this chick’s en fuego!”